My name is Megan McDonald. My husband (Chase McDonald) and I have been a part of the IBA (Iowa Bowhunting Association) for years, as my husband is the Vice President of the IBA.  We enjoy being outdoors, hunting, fishing, and spending time with friends and family.  On the 6th of June we went to Ontario’s Superior Country to go bowhunting for bear and fishing.  We ended up meeting some of our other board members there.  We had 11 people in total – all members of the IBA family. The guide and the people we met were absolutely the most amazing, loving, caring and greatest people we have met in while! Bob Bearman, Nipigon River Bear Hunts guide, has been doing hunts for many, many years.  To have someone that has been doing this for as long as he has is a great honor. It was great to get to know him and all the wonderful tips and tricks that he taught everyone. 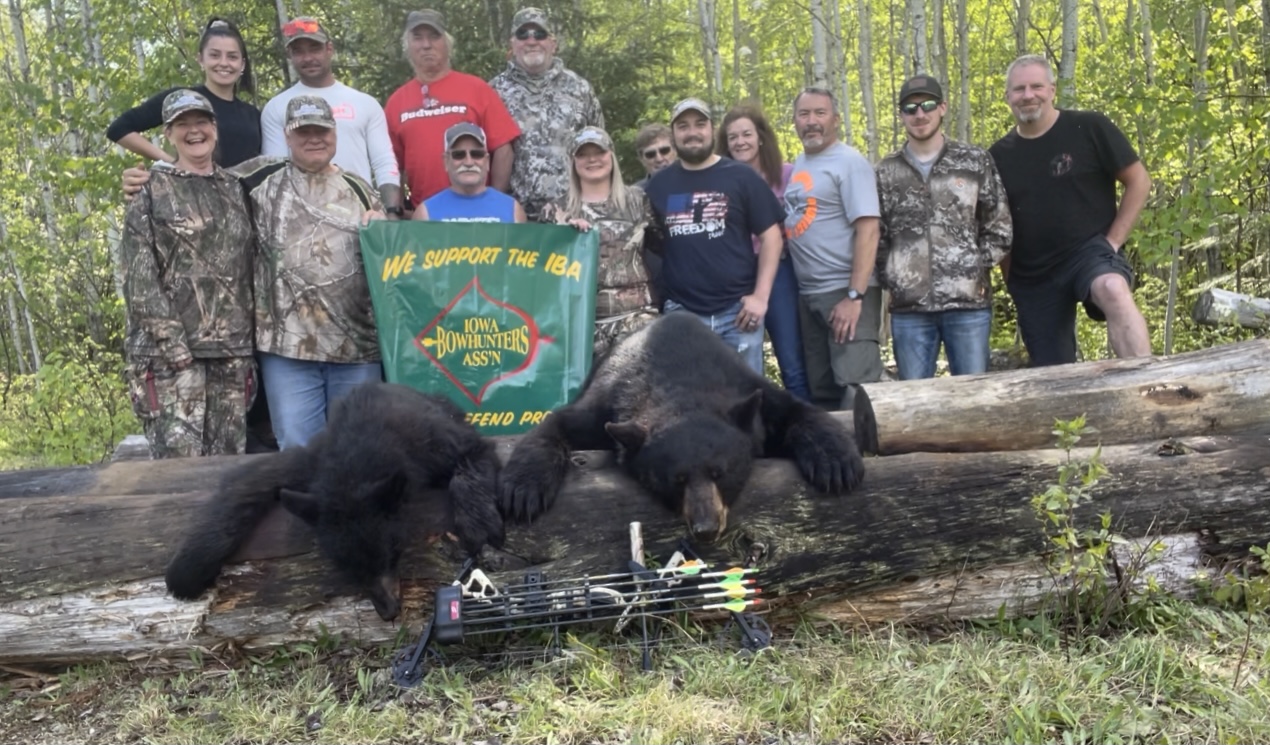 When we arrived in Nipigon, we were welcomed by some amazing people.  That night we went out to the stands to start our first evening of bowhunting bear. During the first sit my husband and I didn’t see a whole lot of action. To us that was no problem at all, we got to spend some time sitting in the stand, listening to nature and admiring the beautiful scenery. Once we got back to camp, we all hung out around the fire, ate some fish, and met a few other people. Almost every evening that we were there ended with at least one person getting a bear. Our nights would end with all of us sitting around the fire and sharing our stories. 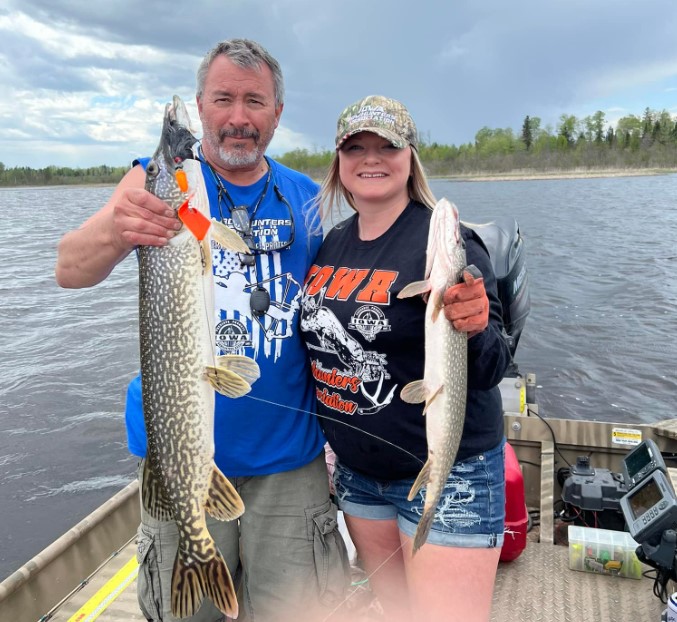 The next day we went fishing in Hurkett and we got a few Northern Pike! Afterwards, we had returned to camp to get ready and loaded up to go back out to the stands. My husband and I went with different people this time and I sat in a different stand. I went with Mark Whyle and my husband, ended up going with Blazic Whyle.  Mark and I had been sitting almost all evening and did not see anything… But, once again that was just fine, we got to know each other a little more and got to admire the nature. At approximately 9pm,  Mark and I were still in the stand. Suddenly, I heard shuffling, I moved towards the sound to see what the fuss was about. It was a bear! First, I thought the bear was a cub! Mark had then made a comment saying, “honey, that is not a cub… that is a BIG bear”. Mark and I sat being as still as still could be. At this time the bear had gone behind some trees and we could hardly see him. After about 20 to 30 minutes of not moving at all he finally showed up and started to head into the where the bait was. In that moment, I had been trying to get Mark’s attention without moving too much or being loud. I could not get Mark’s name out of my mouth as with how much adrenalin and excitement that I had! Mind you, this is my first time bowhunting bear, and actually bowhunting in general! I have always wanted to get into bow hunting but due to a surgery and some health conditions hadn’t gotten to – until now. 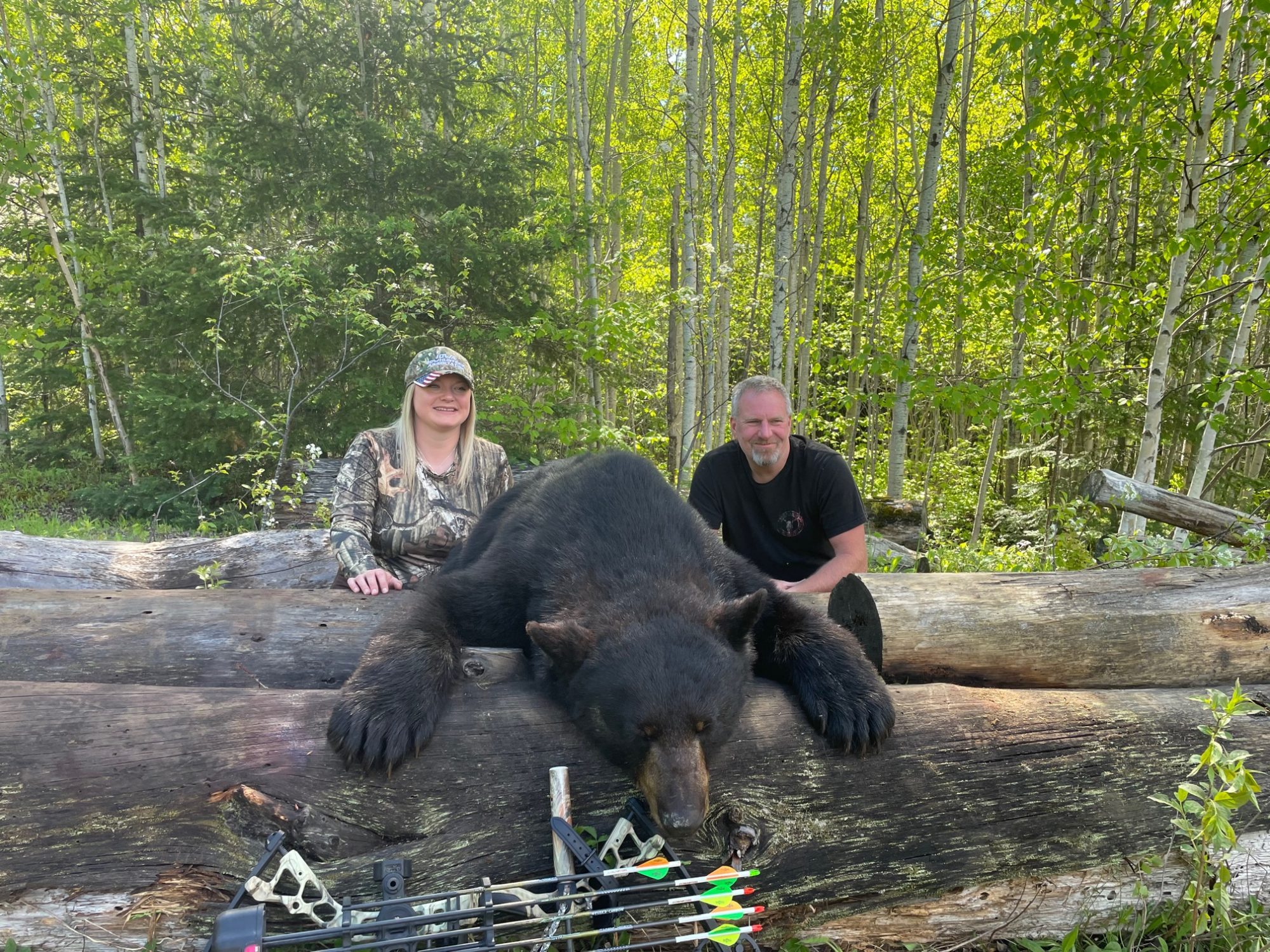 I was finally able to get ahold of myself to calm down. The bear had sniffed around and looked right at Mark and I. He then began to slowly start eating out of the barrel. He ended up getting his head stuck in there a little bit due to how big he was. At this point I was drawn back with my bow, the boar popped his head out and started chewing. When he went back into the barrel to get more, I focused myself, took a deep breath and took a shot at him. I hit him in a good kill spot – double lunging him. He ran about 30-40 yards, bedding down and then exclaimed his death moan. At that point it had been about 20 minutes after I had shot him. I then turned to Mark and said, “can we go find him?!” He then said, “YES!” I was beyond excited and VERY proud of myself. 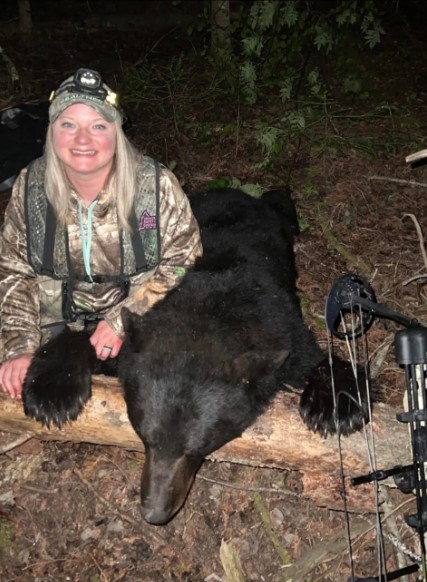 Mark and I ended up going to my bear and found him! Once I had snapped a quick picture with my bear we headed out to the road. Mark and I were waiting for Chase, Blazic and my father-in-law. Once they showed up Mark and I had a plan to play a trick on them. I showed them my half arrow that had broken off that was full of blood, I approached them saying, “Guys, I shot a smaller bear and we aren’t sure exactly where it went, would y’all be able to come help us locate him?” They then said, “yes.” At this point Mark and I had them fooled! Once back by the bait, we showed them what direction that we thought he had gone. We started following the blood trail, acting like we had just seen it for the first time. Once at my bear, everyone was in shock, “OH MY GOSH!!! That is NOT a small bear!” Mark and I couldn’t help but laugh, “We got you guys good!”. 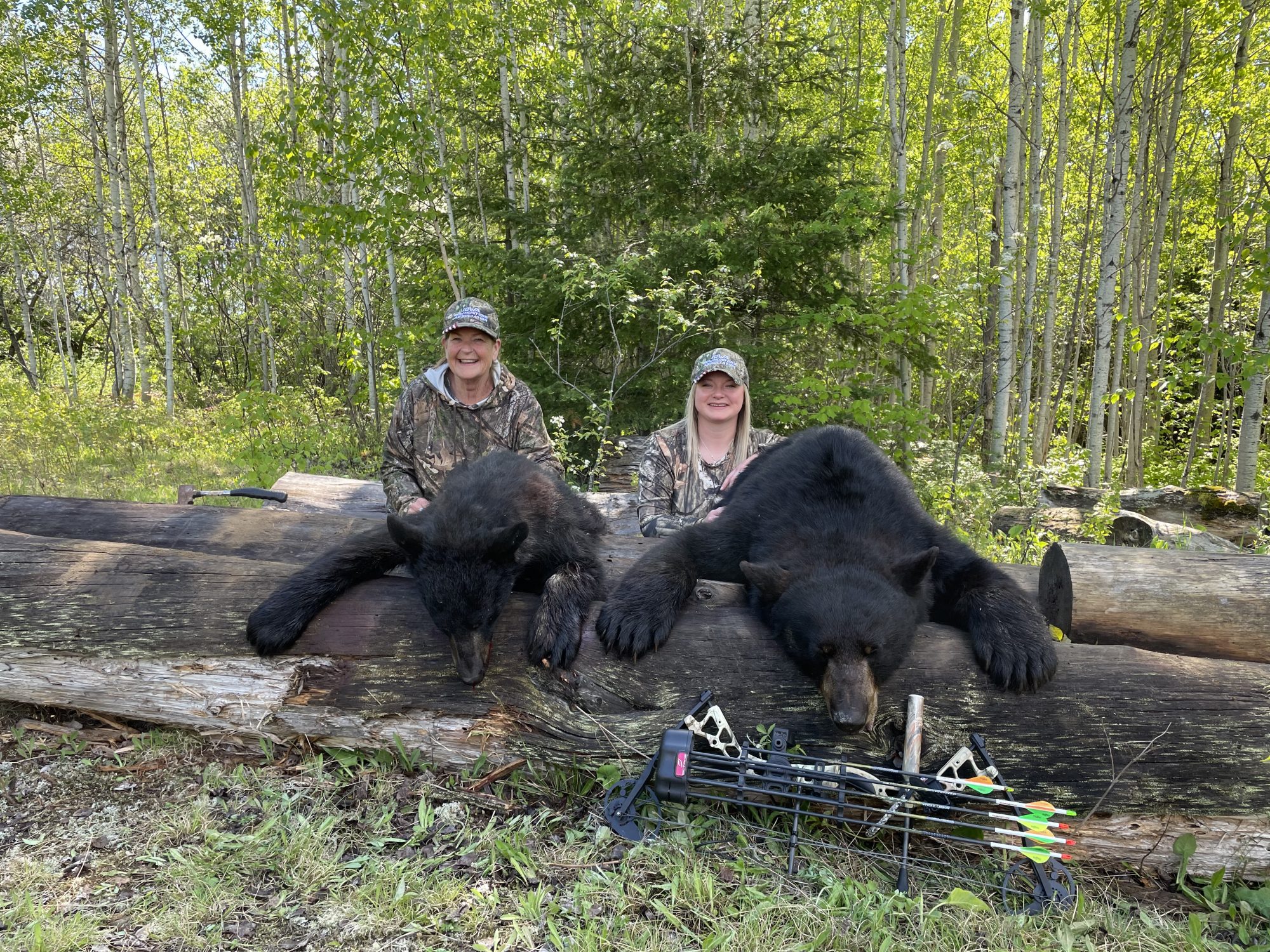 Let me tell you, trying to drag him out of there was a huge job to do. Thankfully we had 4 guys plus myself. All of the guys ended up getting him out and into the bed of the truck. Then we started to head back to camp. We were about five minutes out and we got a phone call from Bob Branchcomb, asking if anyone had gotten a bear and where we were. We told him that we did not have anything and that we were only five minutes out. Once we got there, Dan (My father-in-law) started backing up to the shop. At this point everyone was looking at us confused, “I thought y’all didn’t get anything?”. I jumped out of the truck as fast as I could, even while Dan was still backing up. I walked past everyone and said, “So… do y’all want to see my bear?!” everyone hurried to the truck, as soon as I got the tailgate down everyone was exclaiming “HE IS A BEAST!”, “Congratulations”, “Look at him!”. We then got him out to do a weigh in… he was 352lbs!! I was so darn proud of myself for the shot that I made, with getting my first bear as well as my first animal harvest with a bow! 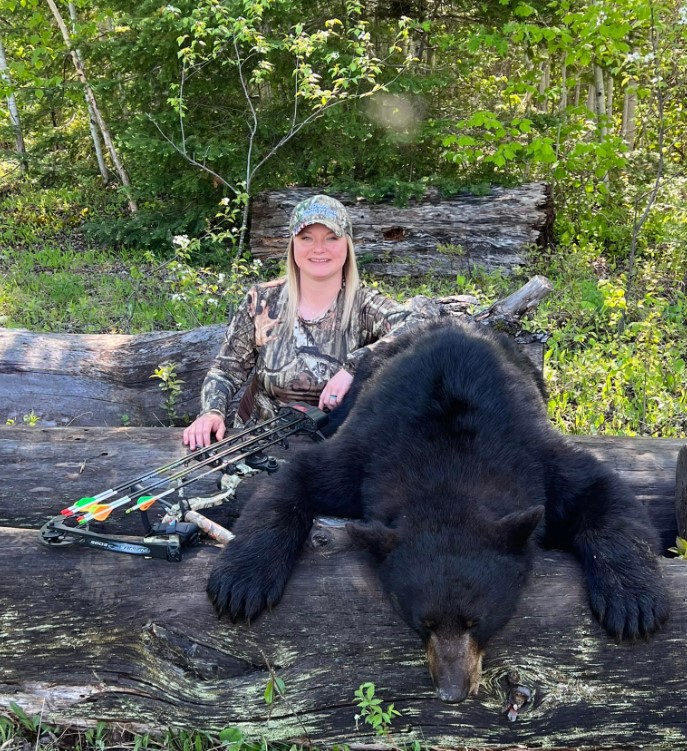 As the week went on, we got to know more people and became close with some of them! We still talk to each other now that we are home. We have talked about us going back there and about them coming to visit us as well! That way we can show them how us Midwesterners do it here in Iowa, just as they showed us a lot about how they do it in Northern Ontario! We had an AMAZING time there with everyone. 11 out of 11 of us all got tagged out! It was the most fun, adventurous, and just plain out amazing trip and place to visit that I have ever been. We cannot thank Bob Bearman, Brooke Russell and Brady McDonald enough for all that they did for us and for the warm welcome! It was plain out amazing that we made some darn good friends there at Nipigon River Bear Hunts. The IBA will be back and are excited to share all the wonderful things that they all did for us and how amazing the whole week and hunt was!