Every spring, steelhead run up the coastal tributary streams and rivers of Lake Superior. They have been doing this for well over 100 years in the greatest of lakes, although they are not a native species. Steelhead – another name for rainbow trout – were introduced from the west coast of North America. These western steelhead, which live as adults in the Pacific Ocean but spawn in freshwater streams, took amazingly well to the harsher, cold environment of Lake Superior. Steelhead are incredibly tough, running up the coastal streams of Lake Superior, leaping falls again and again, in order to reach the spawning grounds. The power these fish have is spectacular, which is why they are such a highly favored sport fish. A steelhead can test your tackle like few other fish, and broken lines and even fishing rods are not unheard of. 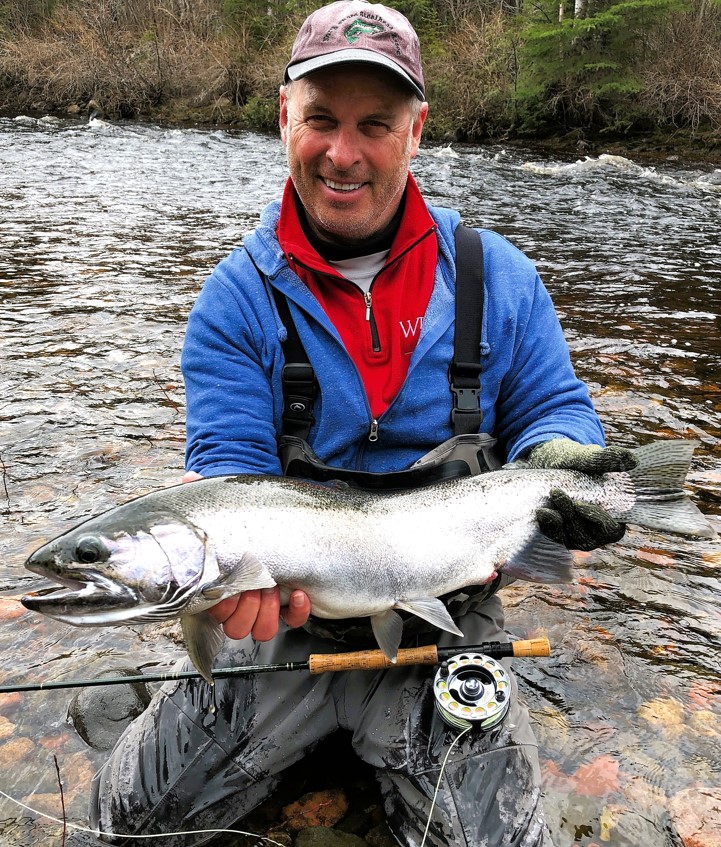 When I was a young steelheader, most fish caught were kept and killed. The limit was five fish back then, so on a typical morning, it was not unusual to see 25 or 30 dead steelhead on the banks of the more popular rivers. These were adult spawning fish that averaged five to eight pounds. As the years went on, and steelhead fishing grew more popular, the runs began to dwindle, and the average size went down. It was clear something needed to be done. In the late1990s a committee was struck to look at bag limits and overall conservation of Lake Superior steelhead. This writer was on that committee, as were several other notable anglers including members of the North Shore Steelhead Association. After much study and deliberation, the result was a one fish limit for much of Superior’s north shore. With this regulation change came the need to increase awareness of proper handling and releasing of these fish. Catch and release has played a key role in the preservation of steelhead on Lake Superior. 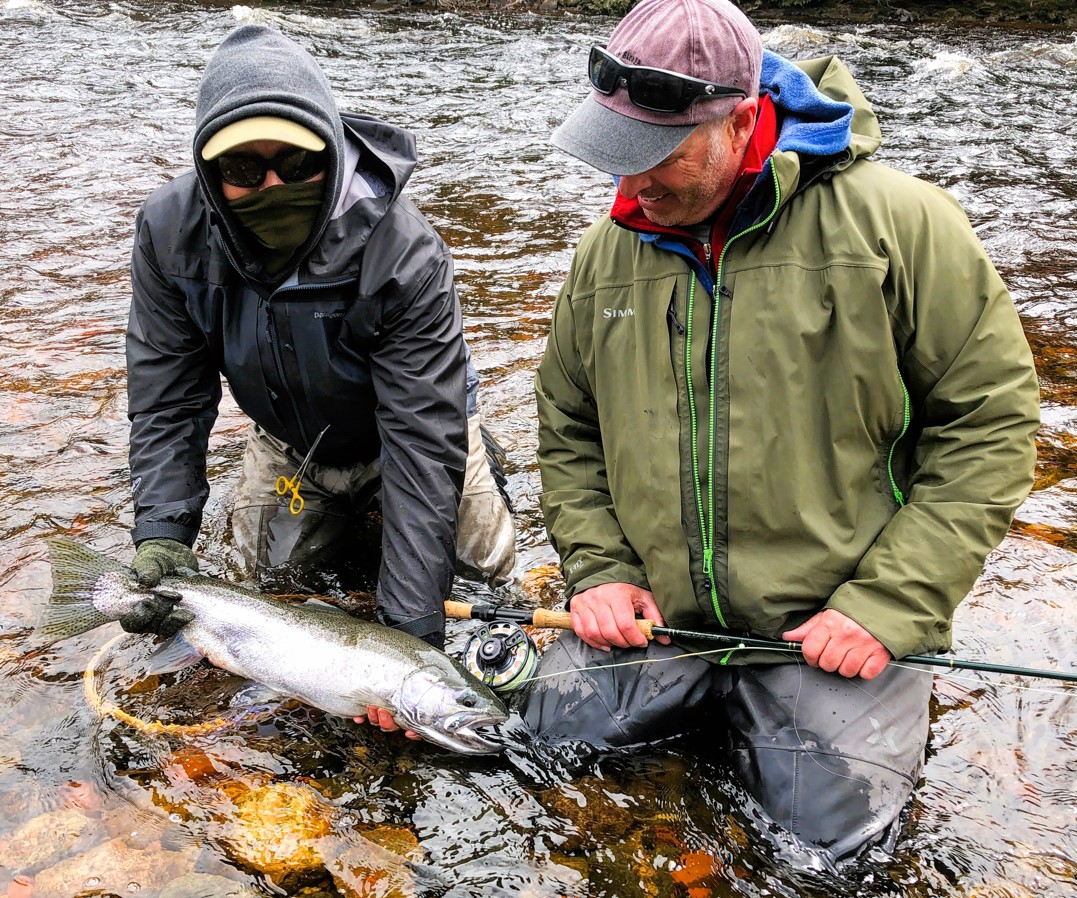 Handling Steelhead with Nets and Gloves

Steelhead are generally caught in rivers and streams, often in fast water. That means landing these fish can be tricky. Many anglers use a net to land steelhead, and this is fine, if the net is not nylon or a coarse material that will damage fins and remove the slime. Keeping the fish in the net and in the water when it is unhooked makes a big difference. As was mentioned already, these are a tough fish, and the colder the water, the better they do. Luckily much of the run of steelhead happens in late April and early May when water temperatures are often bone chilling.

If you don’t us a net to land a steelhead, you will need to beach the fish and handle it with a wet cotton glove. Recently, due to misinformation on social media, handling trout with a wet glove has become a hot bottom issue. However, every fisheries scientist, biologist and fish technician I’ve known in 30 plus years as an outdoor educator used a wet cotton glove to handle steelhead. Why? Because trout are slippery, and if you don’t have a firm hold on them, they slip and bounce off rocks and logs and that’s not good. 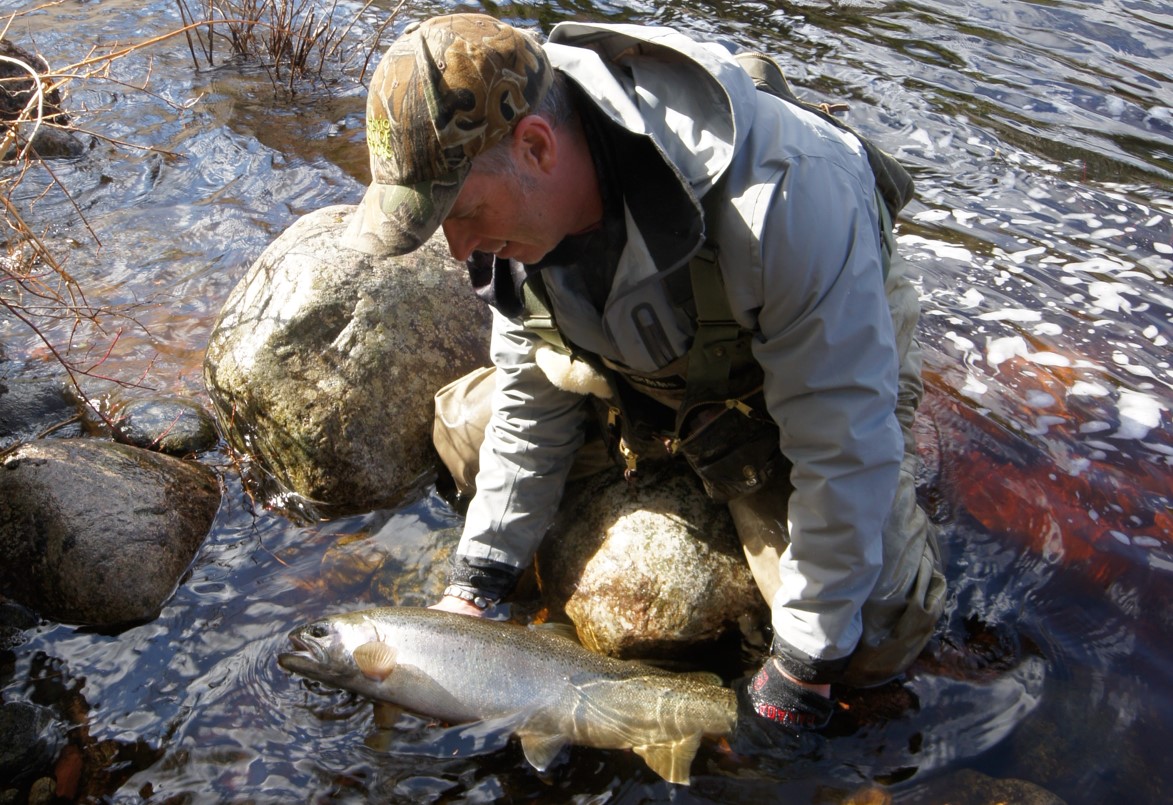 The knock against gloves is they “cause fungus.” The fact is steelhead can be handled with a wet cotton glove safely. For many years, steelhead by the hundreds have been tagged by volunteers and biologists on Lake Superior’s north shore. Tag returns from these fish are common and some tagged steelhead have been recaught several times, over many years. Every single fish tagged has been handled with a wet cotton glove.

When you use a cotton or fleece glove, make sure it is nice and damp. Hold the trout by the wrist of the tail and support its belly. Never hoist a steelhead by the gill plate unless the other hand is supporting its body weight.

Beside a net and/or cotton glove, the tools for dealing with steelhead are few. Steelhead in rivers are mostly caught with single hooks, either via a fly or a hook baited with a roe bag or rubber worm. A pair of haemostats or a small pair of needle nose pliers will extract most single hooks easily. Have these tools on a tether that you can attach to your vest or knapsack. One of the inevitable events when steelheading is dropping your pliers in the drink. A tether will save the day. 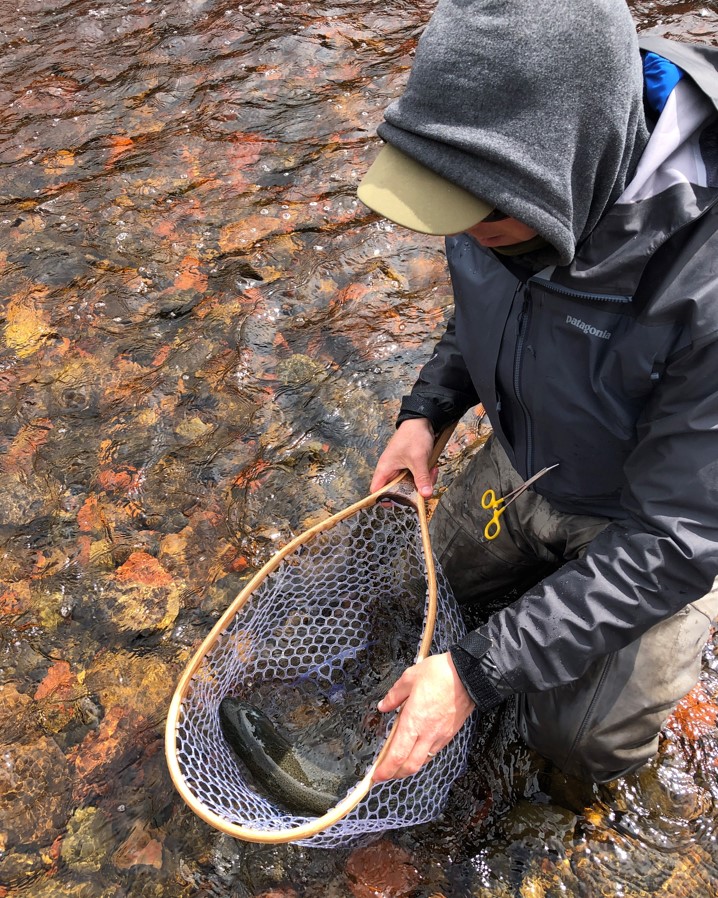 Steelhead fight hard when hooked and often leap and make powerful runs. They will be tired fish by the time they are landed. Keep this in mind when handling them. Keep the steelhead in the water as much as possible when removing the hook. Don’t let it flop around on shore and do your best not to drop them. When it’s time to be releasing steelhead, hold it gently in the water by the tail and allow the trout to breathe. Try to keep it out of the main current if possible. When it is time, the fish will tell you it wants to go with its tail. Let the trout swim off on its own steam. Quite often  catching, handling and releasing steelhead will make them tired. So, they will park on the bottom of the river or creek and get its bearings. Let the fish do this and give it a little space. In time, it will be back to doing what nature has called it to do: Running upstream to make the next generation of steelhead.

The care you take with each fish will help that legacy continue.