July 21st , 2015 will mark a century since Dr. J. W. Cook caught the world record brook trout, in Ontario’s Nipigon River, one of the most notable of all freshwater fishing records.  The fish, that date, and the angler are the stuff that dreams and obsession are forged from.  So welcome to my obsession. I know the record brook trout story all too well, growing up chasing brook trout in Southern Ontario while dreaming of the Nipigon and its trophies, often wondering what it must have been like on the river that week in July 1915 when Dr. Cook and his party fished the Nipigon and made history.  I now live within two hours of the river and consider myself blessed to be able to regularly enjoy its treasures, fishing over water that was once home to the record fish and possibly its counterpart today.

Dr. Cook’s massive trout was hooked, fought and landed on the upper Nipigon River at Rabbit (Mac Donald’s) Rapids.  Today, the river is very much different from what it was a century ago, but trophy brook trout still inhabit this beautiful, austere place.

Much has been written about this fabulous specimen, but here’s my two cents worth.  At 14 ½ pounds, sceptics have suggested it was too big to be a pure brook trout, but rather some sort of hybrid.  However, I find it more plausible to accept that it was a pure Salvelinus fontinalis, as the Nipigon is full of big brook trout and hybrids are very rare.  Moreover, Dr. Cook ensured that his fish was weighed and meticulously examined by fishery experts, whose findings were indisputable.

I’m convinced that the Nipigon is still capable of producing trophy to beat Dr. Cook’s 100 year old record, despite the toll taken by dam construction, diversions, spawning habitat destruction, and over-harvest, and today, steps are being taken to remedy this. During the past 20 years, the Nipigon has rebounded nicely, mainly due to harvest/size restrictions along with early season closures and habitat protection.

Ironically, I believe that one of the biggest contributors to the Nipigon brook trout’s decline, the hydro dams, may now help produce a possible record fish, as the rail waters create productive white water habitat similar to the extensive wild rapids of 100 years ago.  This, along with genetics and a virtually unlimited supply of rainbow smelts to forage on, provide the conditions to produce a fish to beat Dr. Cook’s record.

I have been extremely fortunate to have had the opportunity to fish the Nipigon extensively over the past 18 years, after my career brought me to North-western Ontario, and have seen several fish taken that have been close to or even equal to the record. Finally, I was able to live my childhood dream. Camping and fishing there for a week every June, my wife and I quickly fell under the spell of the hallowed waters. I will never forget my first encounter with the river’s trophy brook trout. As I was swinging a streamer fly at the head of a rapid, I watched an absolute monster brook trout rise from the bottom into the boat’s propeller wash and eyeball my fly. It hovered there for what seemed like an eternity then simply sank back into the depths. To this day, it was the largest brook trout I have ever laid eyes upon. On another occasion we spotted two large brook trout lying over a submerged reef in the current, and when I swung a fly over them the smaller of the two grabbed it. It measured a full 24 inches, and the other was easily four to six inches longer! Thus, such trophy fish inhabit the Nipigon today!

The Nipigon River should be on every serious fly fisher’s list, as it is one of the planet’s very special places.  It will provide an experience you will cherish and, who knows, may just enable you to make history. 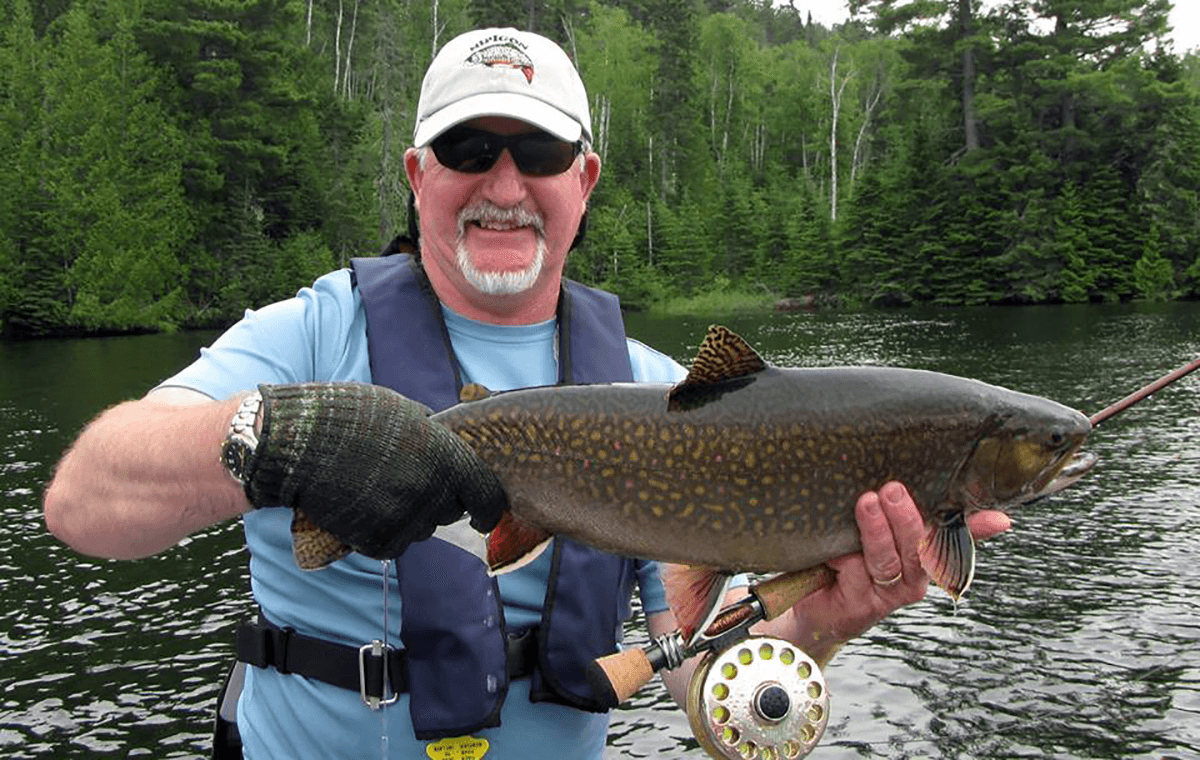