The time to leave was 9:30AM, the place of departure was Red Rock Marina in the township of Red Rock, Ontario. The morning was covered in a thick blanket of fog, and the humidity made it hang in the air in a still limbo. Despite the wall of fog that followed us from Nipigon all the way to Red Rock, myself, executive director of Superior Country Dan Bevilacqua, and his intern Shalane Sarrasin were all hopeful in the fact that this fog was not going to ruin our exciting day exploring the tops of Lake Superior. Besides, we were confident in the fact that Darrel, the owner of North Superior Charters who was taking us out for an adventure, was going to make this day one to remember. And he did not let us down! 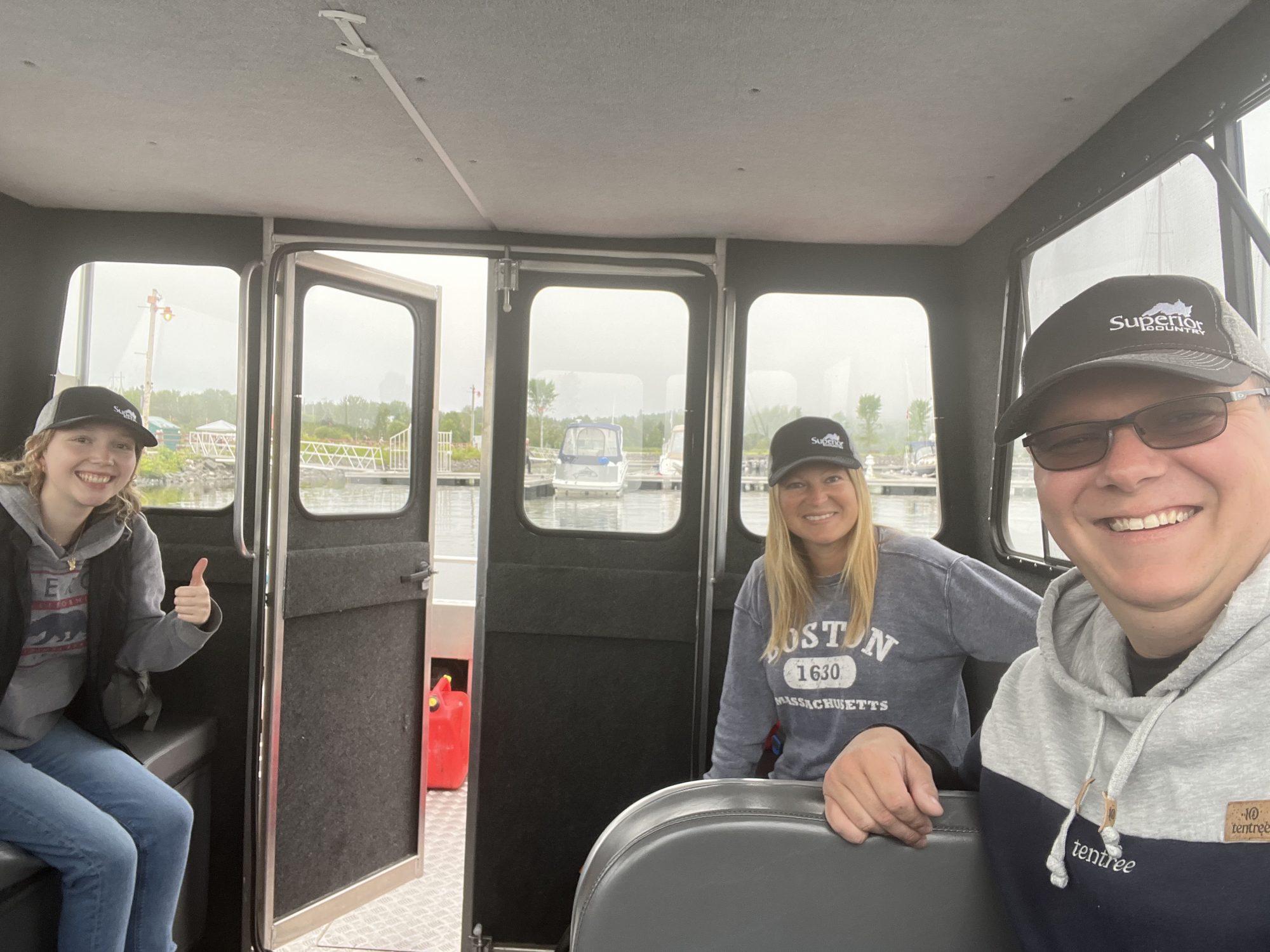 When we met him at the Red Rock Interpretive Centre just before the designated time, we were all excited for adventure. He led us out of the building and to the docks of the Marina, where lines of beautiful boats were resting on the calm waters of the grey morning. All that could be heard was the bobble of the water hitting the edge of the wood, following our footsteps as we made our way to his vessel to start our journey. We all hopped onto the boat, Darrel started it up, and away we went headfirst into the mouth of the fog. 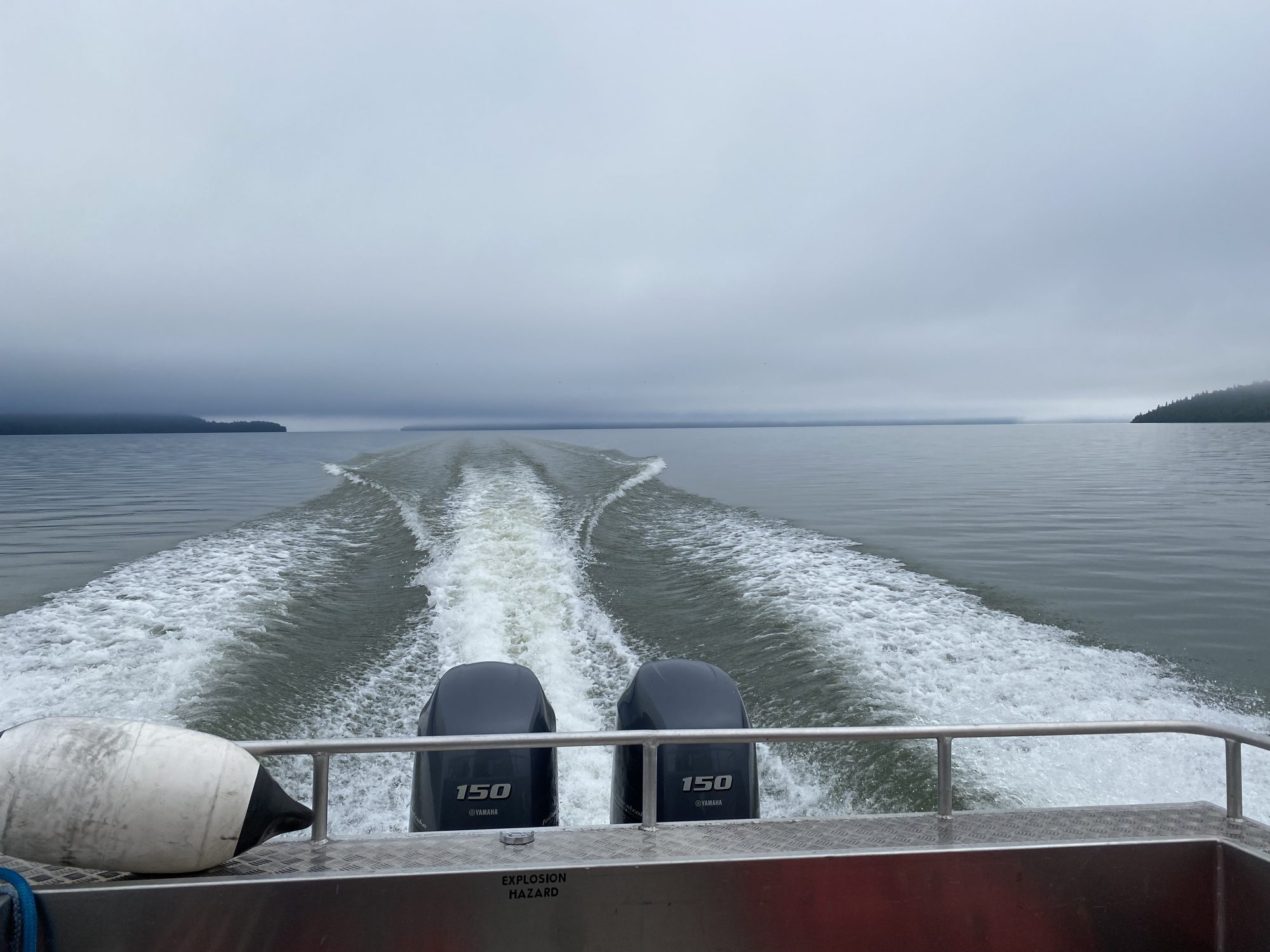 Obviously, despite all of my dramatics about the morning, we were in very capable hands to get us to our destination. The fog was incredibly thick and moving through it was like trying to wipe off your dirty glasses and putting them back on for them to still be dirty. We were making our way through what was called the Nipigon Straights, using GPS to guide us through, heading to his cabins at a place called Moss Island. Even though we had a thick wall obstructing our view to whatever was on either side of us, it was still one of the most beautiful rides I’ve ever seen. The water was completely calm, reflecting the grey sky on top of it. It looked like it was still sleeping and didn’t want to wake up yet. Yet the pattern of the boats motor was creating ripples that reminded me of a whale’s tail. Lake Superior really has a way of being beautiful no matter what the circumstance! 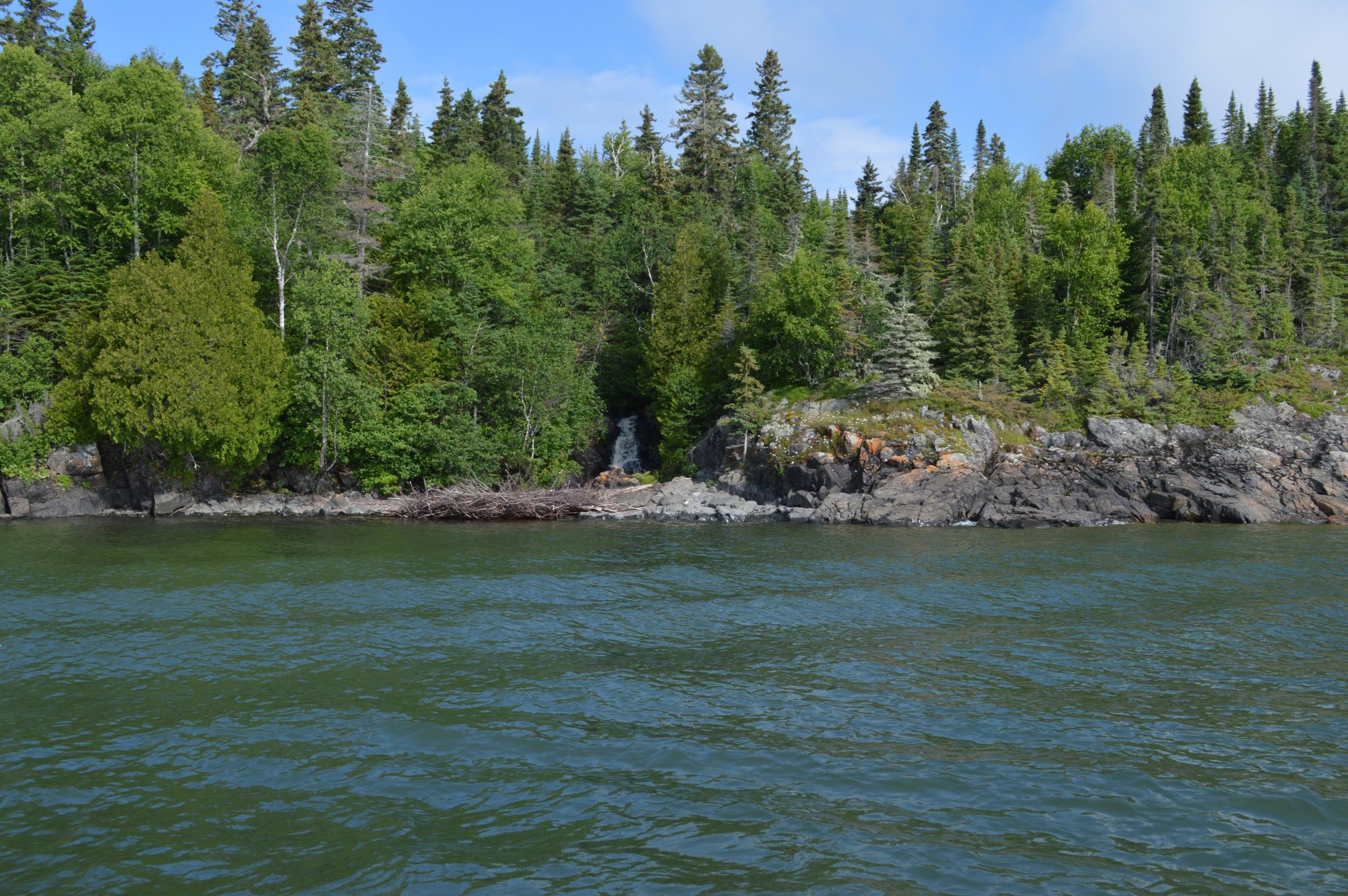 As we kept making our way towards our destination at Moss Island, little pockets of sunshine started to poke holes in the greyness of what was left of the early morning. Little by little we started to see blue sky the closer we got to Darrel’s cabins. And with the appearance of sunshine and blue sky, the islands on either side of us started to show their colourfully green faces. All of a sudden it felt like we were in a storybook, with these islands having giant rocks scathing the sides, and the trees lining the tops. We even found a secret waterfall! 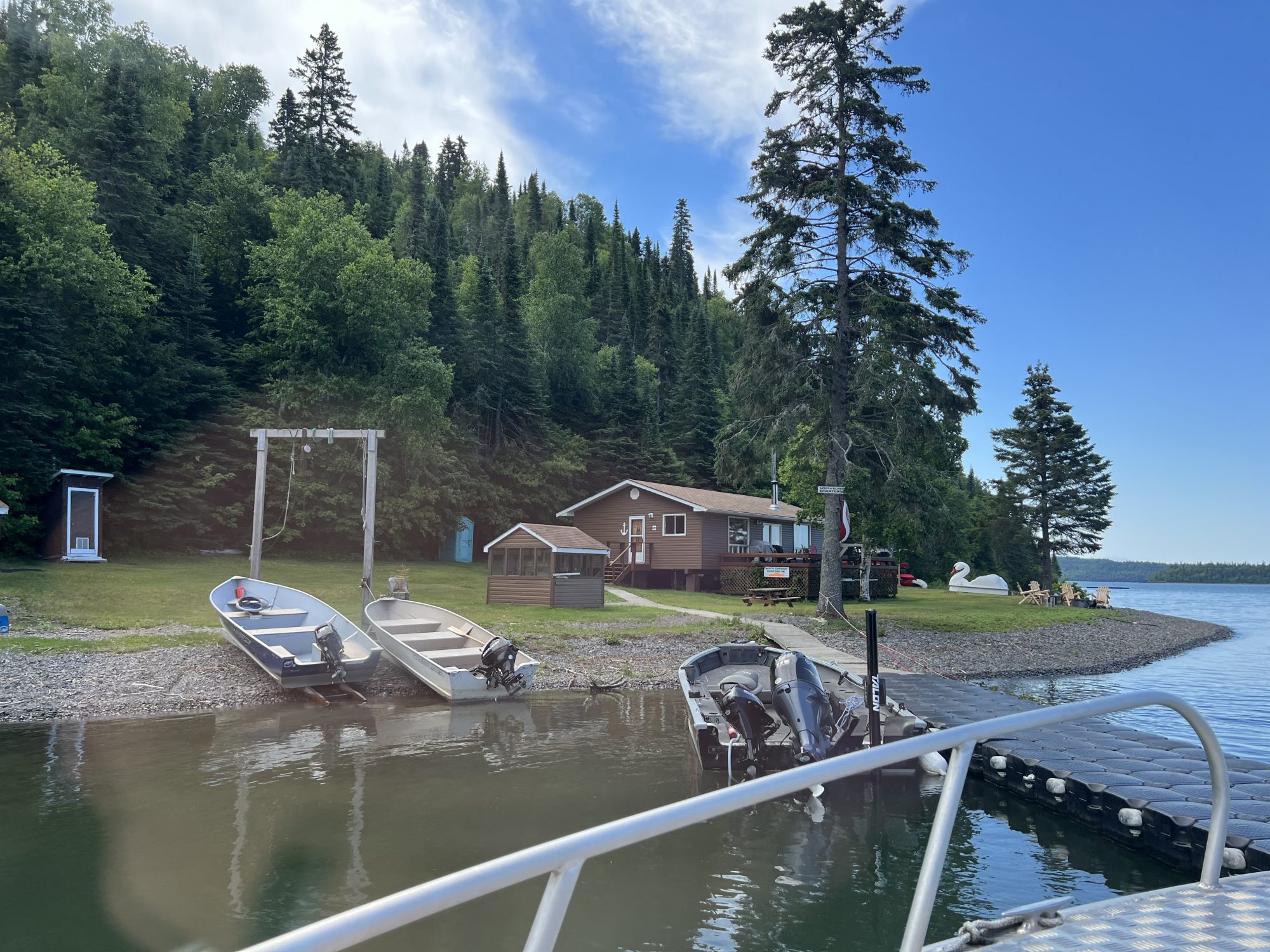 And then, finally, we were coming up on Moss Island, emerging in between two islands like a pathway into another world. The sun was finally out, and the clouds completely cleared to where it was just a brightly blue painted sky above. The golden rays of the sun painted everything around us in a yellow hue, making the greens of the forest a slight brighter. Then, standing tall in the trees is the first cabin of his camp. Shaded by a mountain and the tall cedars of the boreal forest, it is perfectly tucked away from any wind. With a deck wrapped around the top part of the cabin, you would be able to oversee the entire campground, including anything that would come through the watery valley. Right by the shore of the lake was a big firepit, with comfortable wooden chairs to lounge in while you are warmed by the dancing flames of the fire flickering into the night. And my favourite part, a giant swan paddle boat that would bring hours of fun, I’m sure! 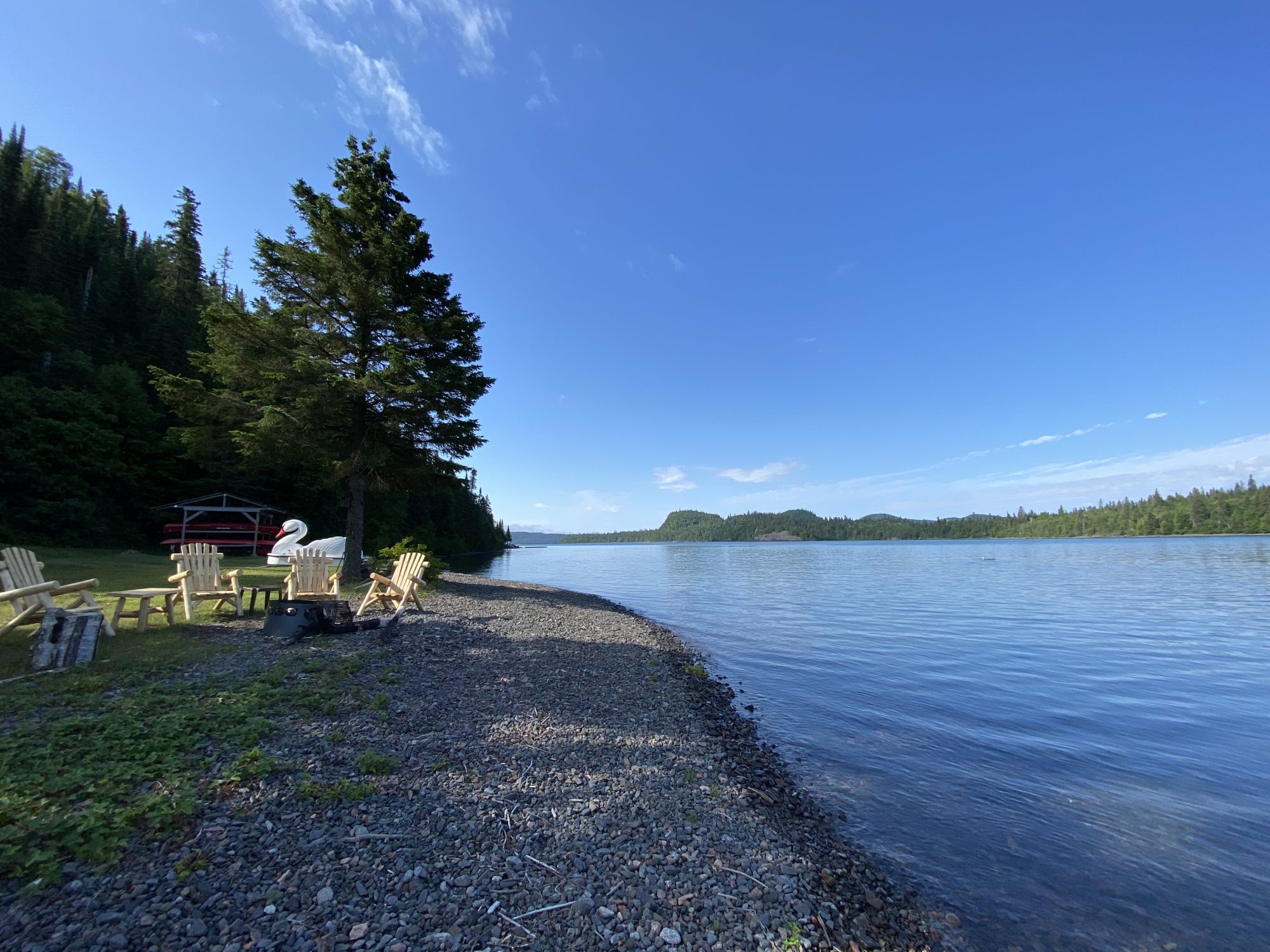 When we got there, Darrel docked the big charter boat which gave Dan, Shalane, and I time to look around. While he was docking, he was telling us about his cabins and how people use them to go fishing and for family vacations and other fun things like that. He said that every time people go there for fish, they catch loads of them, and exciting catches too. He explained that there are tons of pools scattered around the two camps, perfect for a good fight between you and the strong creatures of the deep. And, on top of that, it is a great place for fishers to bring their children or grandchildren to catch their very first fish! I don’t know about y’all but catching my first fish with my grandpa is one of my most cherished memories. And this place is definitely a place that core memories are made. 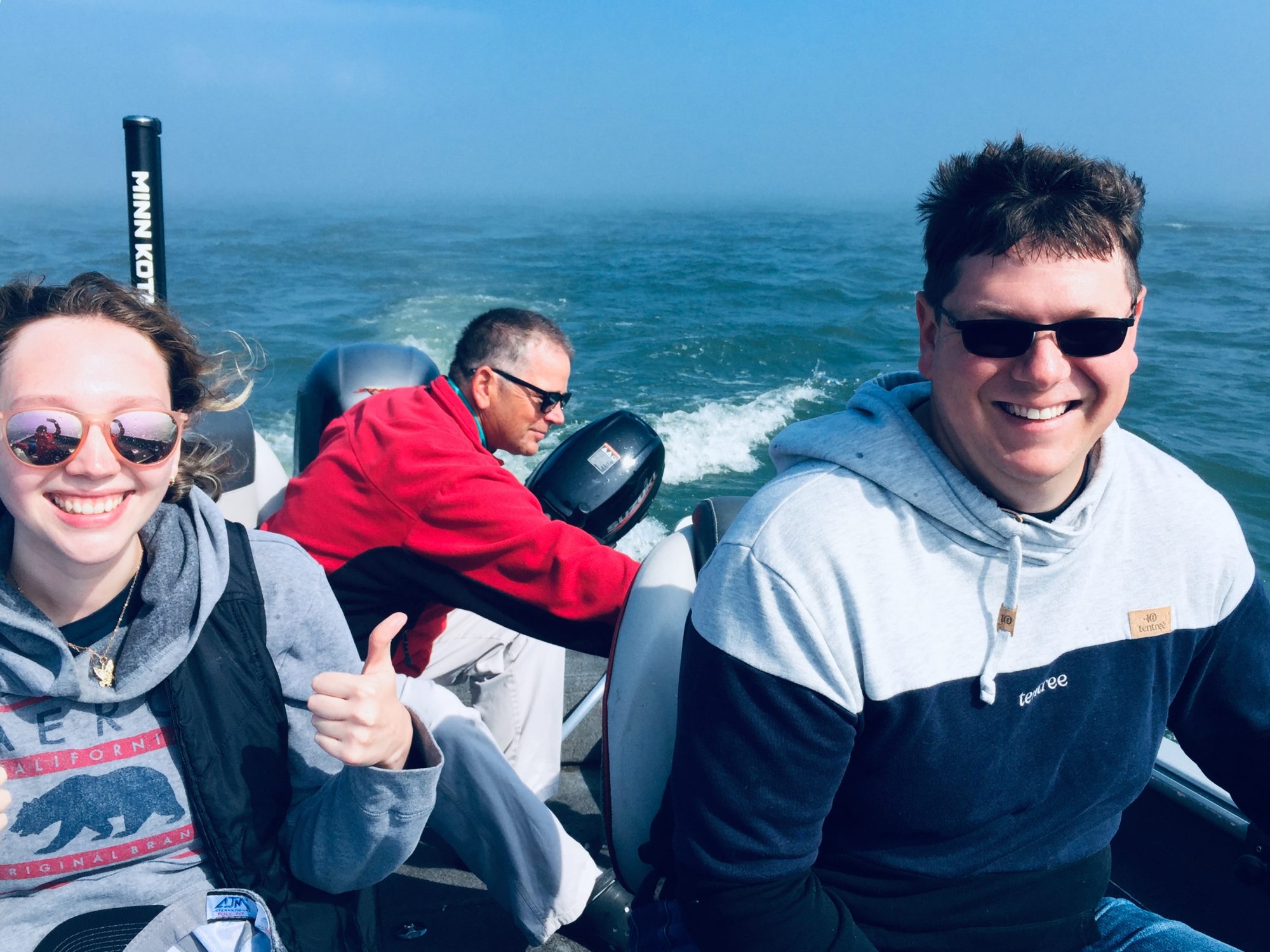 After the big boat was docked, we were heading right out again except this time on the little speed boat with the destination of Lamb Island in our sights. When we headed out, we rounded through the valley of the islands and into what felt and looked like open water but could have very well had islands and sights to see around it. But yet again it was covered in a shroud of some of the thickest fog I’ve ever seen. The waves were growing bigger and bigger with each passing second, and I was totally getting splashed in the face. The only one, too! Apparently on that trip I was the only target for barreling waves. But that’s okay, riding in the bouncy waves will always be one of my favourite parts of rides on Lake Superior. It’s like its own natural roller coaster! 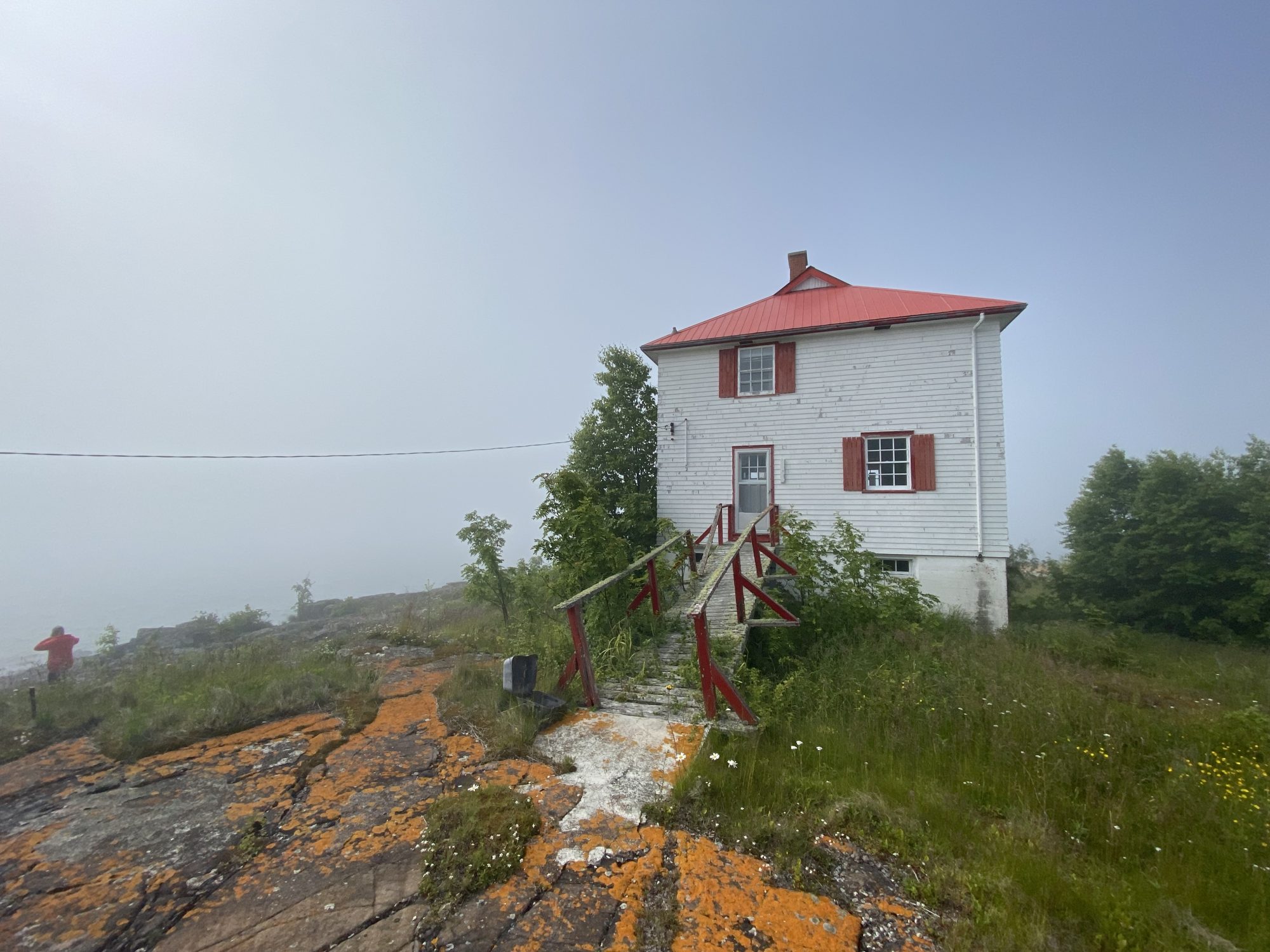 Because of the fog, Lamb Island came up on us out of nowhere. It was really cool seeing it reveal itself within the fog, and only showing its face when we were pulling up to the concrete dock that was cracked no doubt under the pressure of years of Lake Superior storms. The island, Darrel was saying as we walked up, is an abandoned lighthouse island that is now owned by the government of Canada. It is really small and made up of mostly rock that was speckled with the moss from water spraying itself onto the jagged surface. As we looked around, it reminded me of a Scooby Doo movie: with broken, naked beams laid all around, an abandoned house that was scarred from years of unpredictable weather from the moodiness of Lake Superior’s temperament. And then in the distance the bones of the lighthouse, still standing, but not whole in a long time. 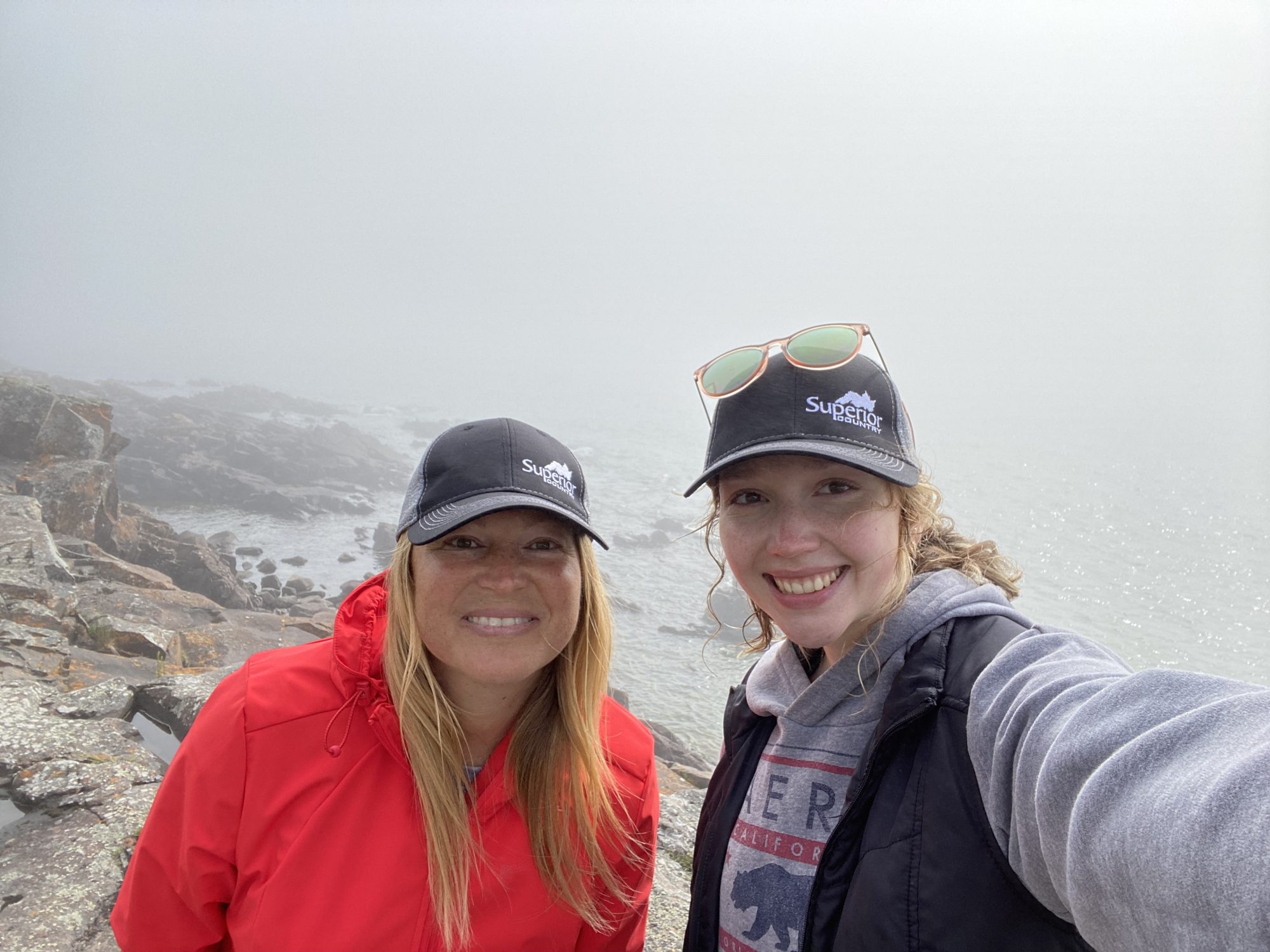 Even though we could not see the views of what was around us, it was still the coolest most spooky (in a good way, of course) thing I’ve ever seen. Shalane and I went climbing down the sharp jagged rocks to get a closer look at the water. The only evidence of actual water that was noticeable was the echoing of the waves crashing onto the edges of the rocks. It still felt like a monumental, unforgettable view. Not to mention an amazing photo background! 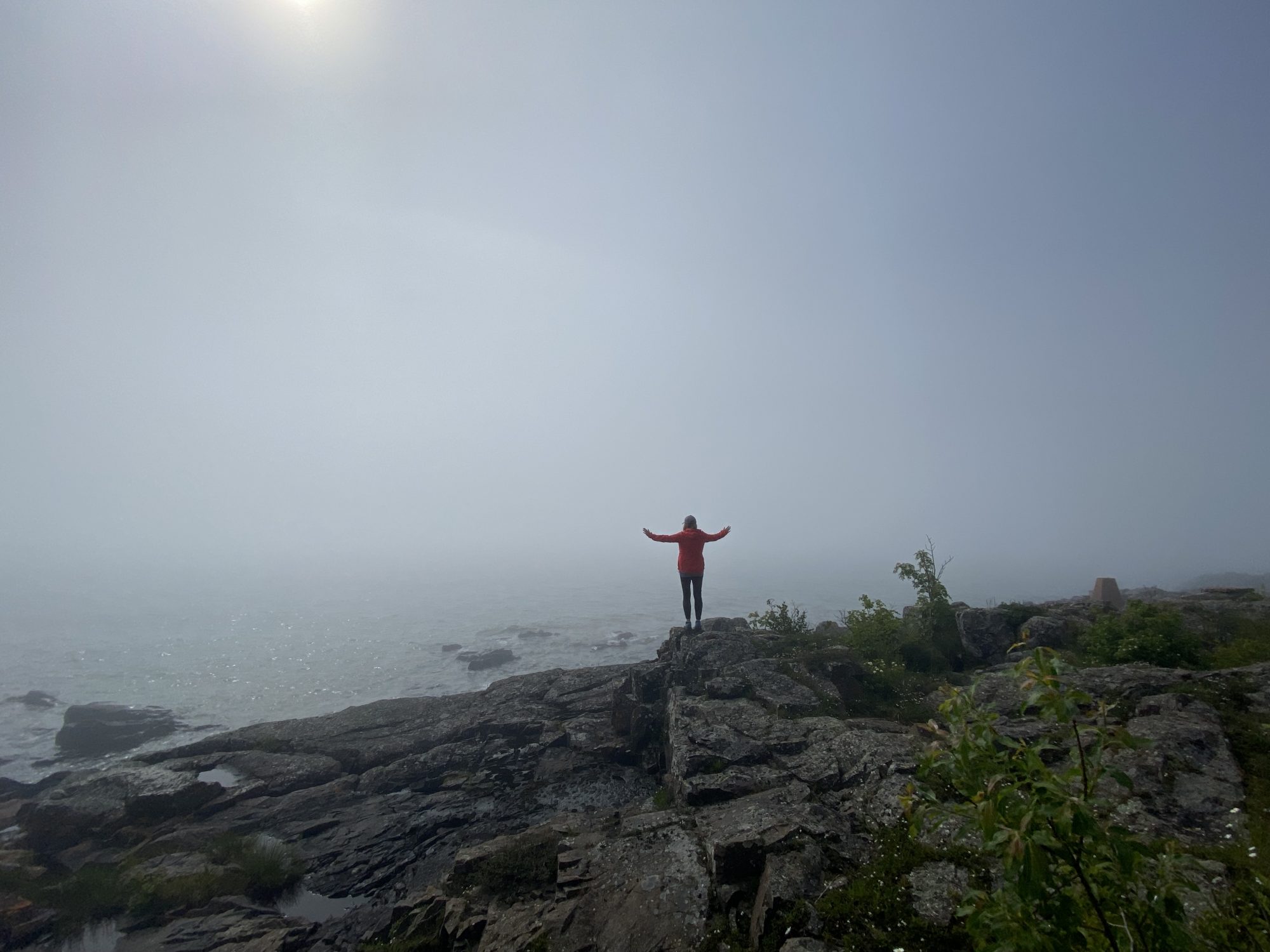 And with that, we headed back to Darrel’s cabin. On our way back, the fog started to lift ever so slightly, and we could even make out a few little rocky islands that were just in front of Lamb Island. It was crazy to see something so close yet was so invisible under the guise of the fog, which we were only travelling in for a short period of time. When we exited, we could see the two islands that made up the valley in which his cabins were built. It was an incredible view, making our way there, and the weather turned out to be a beautiful calm sunny day. The unpredictable weather of Lake Superior never fails to amaze me! 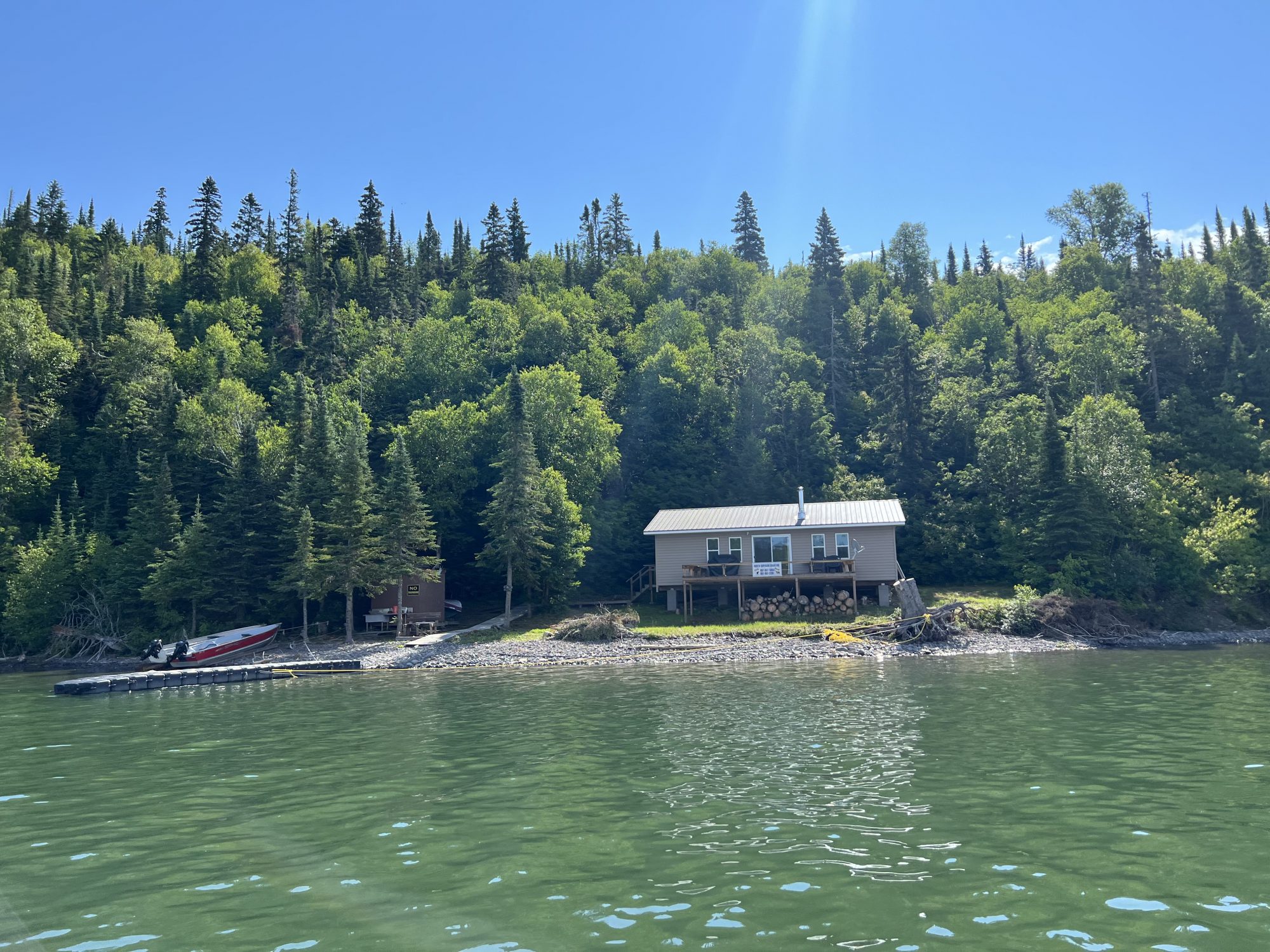 We arrived at Darrel’s second cabin, a little smaller than the first, but equally as beautiful. Truly, these cabins are an oasis like no other. We stopped and stayed there for a little while to eat lunch before we headed back to Red Rock to end our day. It was an amazing gourmet meal of bbq hot dogs on the grill that the cabin had, and even though we forgot the hot dog buns, it was still a nice relaxing and filling meal to end our day! 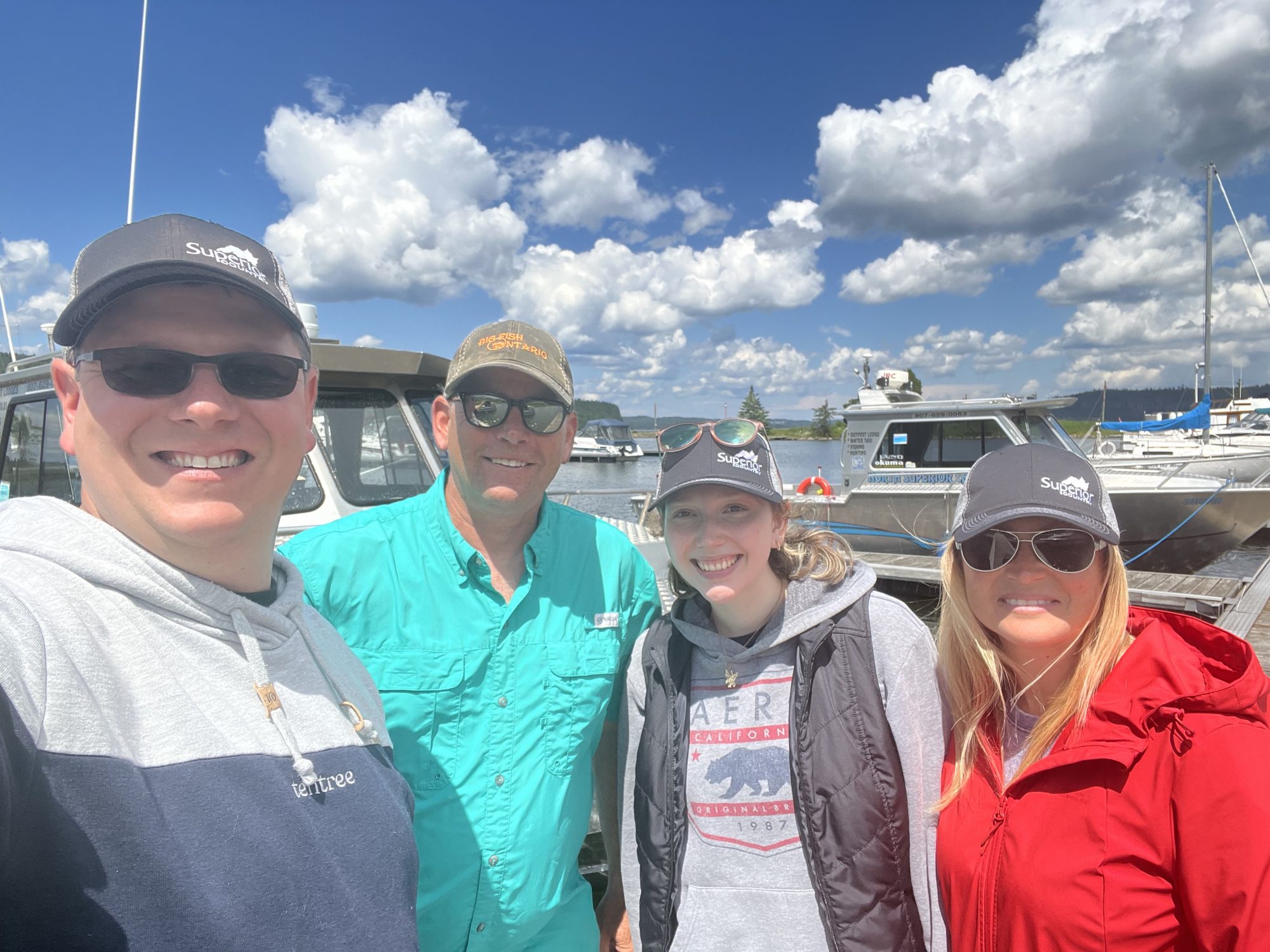 And then we were off, on our way back on the big charter boat, this time in sunny blue skies so that we could see everything that was around us. The three of us had an amazing time on our adventure with Darrel and his North Superior Charters. These cabins are an amazing place for anyone to come for a little break from the craziness of life. Whether that be an exciting fishing trip with your closest buddies or your grandchildren, to a family vacation full of swimming, campfires, laughter, and relaxation. I hope you consider making this place a destination for all of your vacation needs, I promise it will be an amazing one to remember! 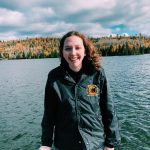 Josie grew up in Nipigon Northern Ontario and is always sharing the love she has for her home. She loves to search for adventure and most of all loves to …