The Giant Trout of the Big Lake

The drive along highway 17, skirting the coast of Lake Superior, the world’s largest freshwater lake, is my absolute favorite drive in Ontario.  It’s nearly as dynamic as the mountains of Canada’s west and as equally rugged as many of Canada’s eastern Maritime provinces.  There is nothing quite like that drive, sunroof open, all windows down and my favorite playlist blasting.  The best part of the drive is where it takes you.  It takes you to Superior Country! A place of vast land, water, rivers and lakes that sits north and above the Huge Water of Lake Superior.  On this trip, we are heading to the heart of Superior Country and looking south, looking to the big lake for an adventure unlike anything we’ve experienced in Ontario. 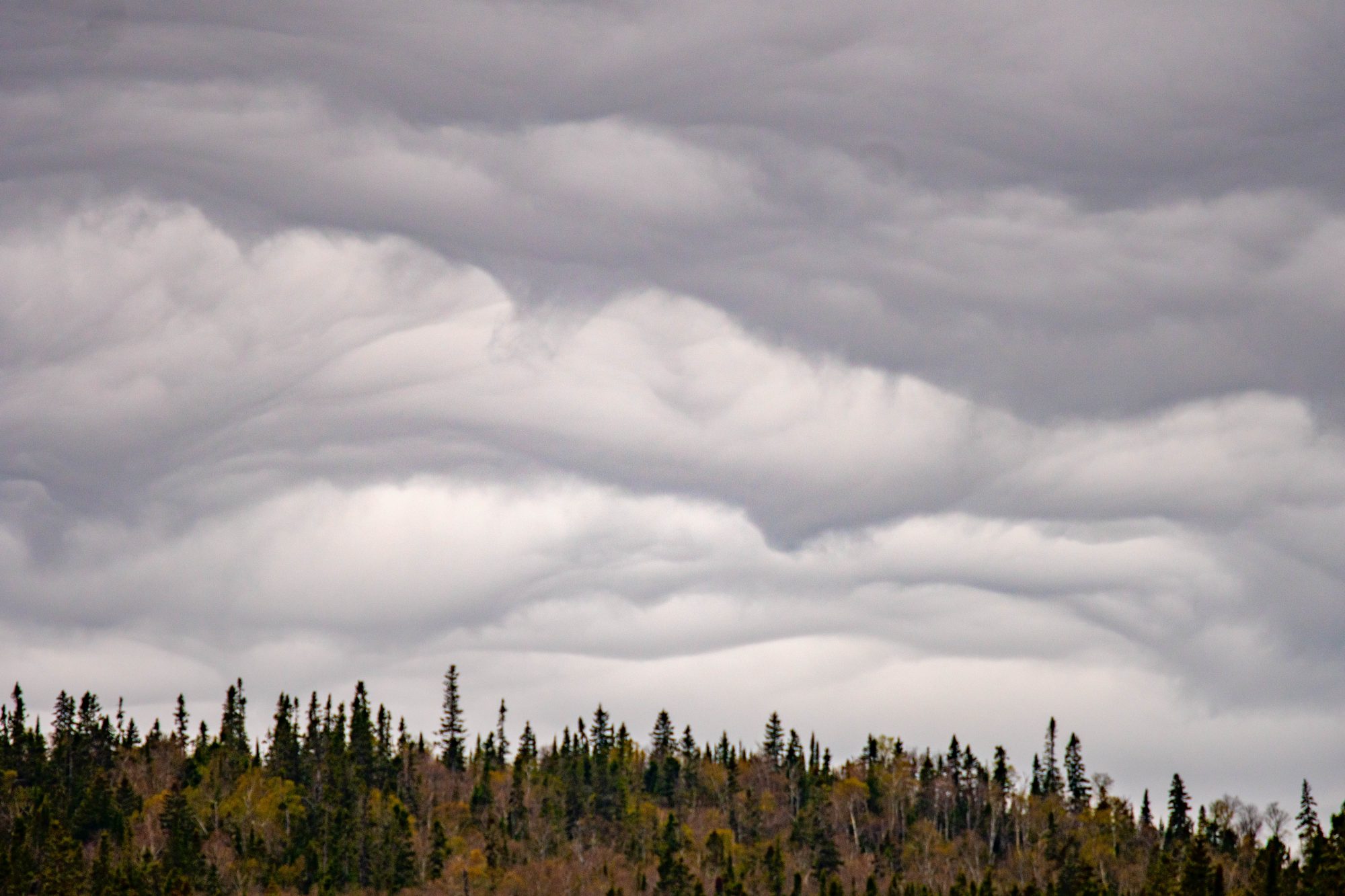 I had been speaking on the phone with lodge owner Gary Lange for a few weeks in preparation for our trip. Though we had never met, I knew he and I were to get along famously.  His gravelly voice and direct demeanor and confidence in his outfit only fueled the fire of excitement for our first road trip of the year.  It was obvious he was equally excited to start the season at Bowman Island Lodge as well.  When we met at the Nipigon Marina, it was like running into an old friend. We were in for an amazing adventure. 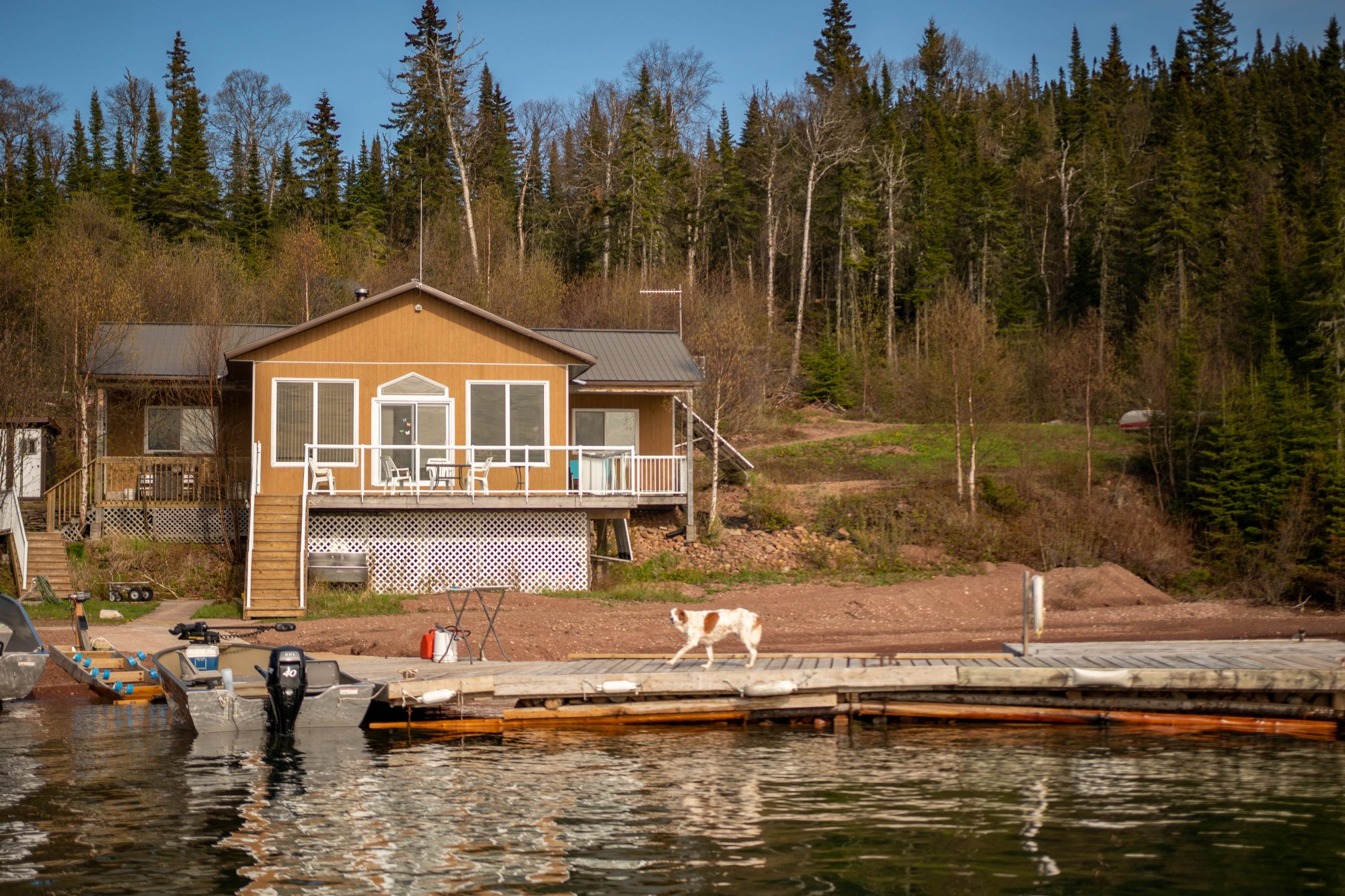 We loaded up our gear for the hour-long trip through the straights of Nipigon to Bowman Island Lodge. Exiting the harbor, dwarfed by the red-rock cliffs, we ventured toward the open water that was Lake Superior. We left the sanctuary of the sound, and were greeted by a wall of fog.  Gary, a licensed captain and a member of the Coast Guard Auxiliary calmly switched over to radar mode  and we ventured forth in foggy conditions and calm following seas.  Upon our arrival, we were met by the camp dog and got settled for our adventure to begin. 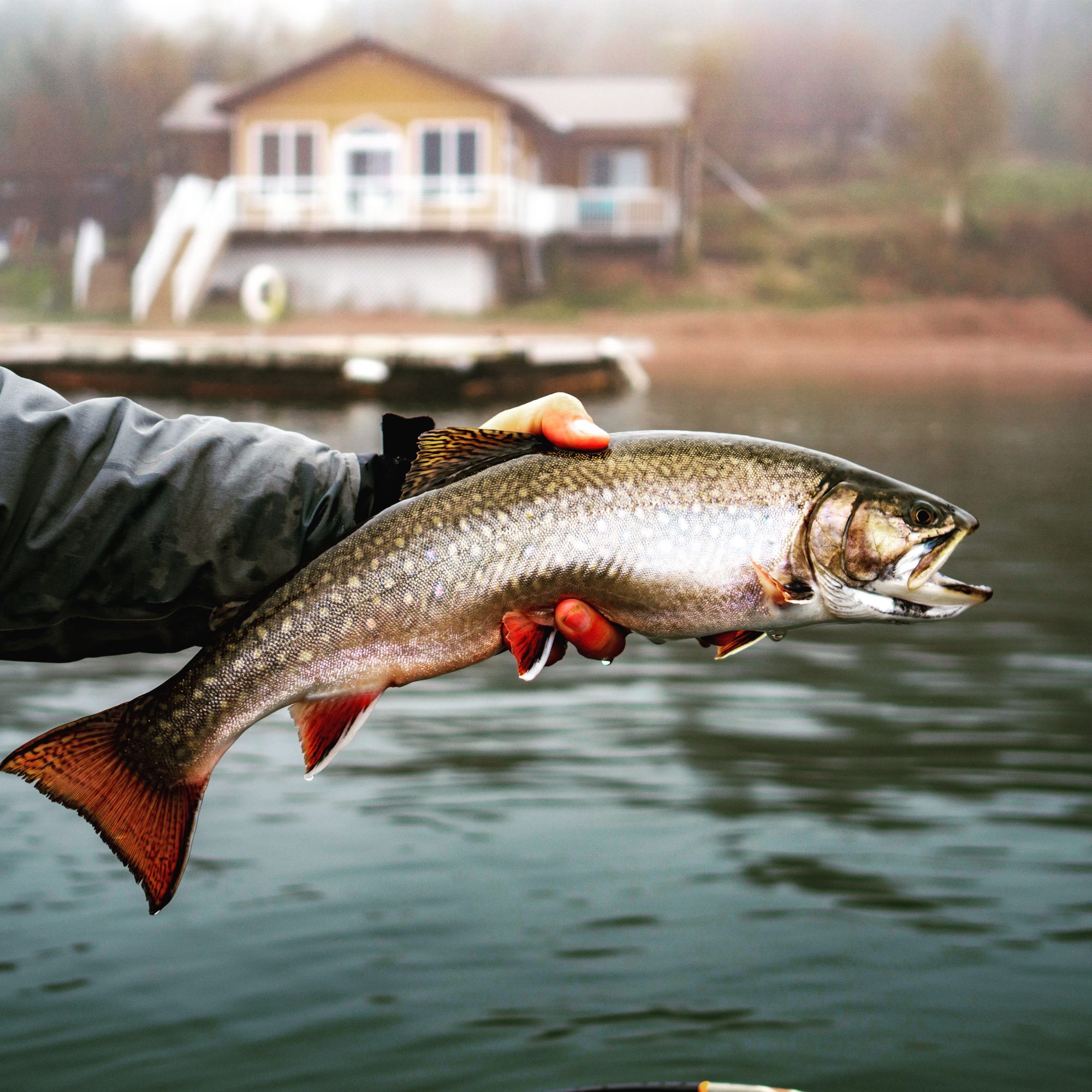 Spring of the year along the coast sees an annual return of trout to the straights of Nipigon. These species include Rainbow, Lake Trout and the crown jewel of Ontario’s north, the brook trout, also referred to as coasters. These coasters are migratory fish that swim the shorelines of these islands in the spring in search of baitfish. They then return to the lake until it’s time to migrate up Superior’s tributaries to spawn in the fall. Timing and water temperature are key for this phenomenon, and this week, we hit it bang on right! We settled in for the evening and told fish stories, building anticipation well into the night. 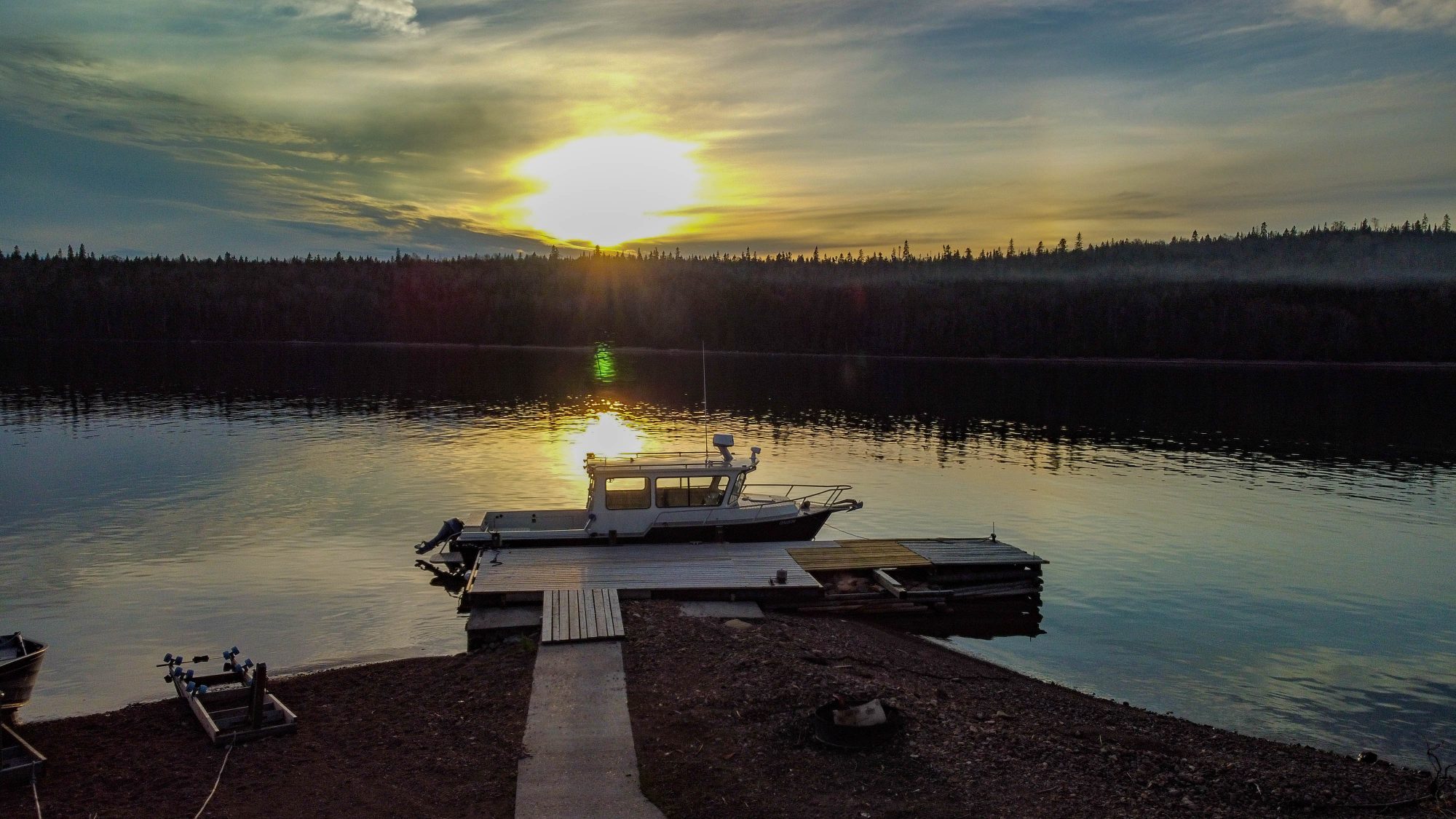 The next morning, Gary got us all set up with the game plan to target these big, aggressive fish. We would be inching along the shoreline making precision casts within a foot of the coast, stripping our flies back to the boat. I was fishing with good friend and recently retired Trout Unlimited biologist, Jack Imhof, so with Gary’s extensive knowledge of the fish of the area and Jack’s understanding of the fish’s biology, we were set up for success for sure.  This can be considered EASY fishing, meaning technique and location are not too advanced at all.  After a quick hour tutorial on the water with Gary, we were set loose to explore. We were instructed to  look for very shallow secondary points relating to deeper water.  It wasn’t too long before Jack jacked his first coaster and it was a great fish to start the trip.  We fished the day away, releasing numerous brook trout all in the 15 – 22 inch range. 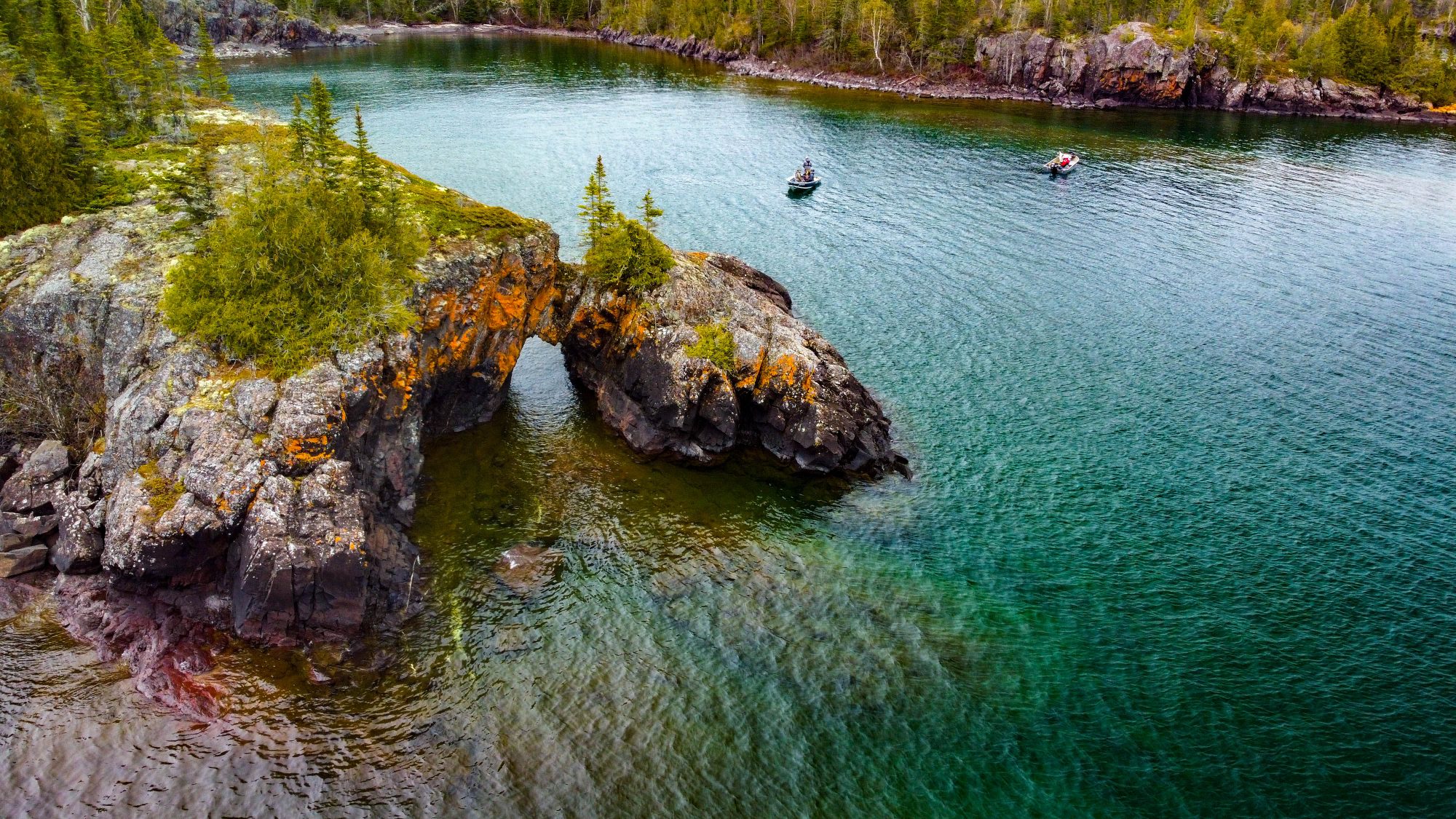 Bowman Island Lodge is a unique outfitter specializing in great fishing as well as outdoor recreation in the area.  Whether you’re an angler, or just want a solitary getaway, Bowman Island Lodge has you covered; be it fishing, swimming, canoe and kayaking, hiking or just relaxing.  Gary hosts you and looks after all things at the lodge setting you free to explore at your leisure.  Family style American plan meals are delicious as well as plentiful leaving no-one hungry. Comfortable accommodations, again family style, makes you feel like you’ve just landed at your own personal lodge. Totally off the grid, you have access all the amenities of home and can even get wifi sometimes! 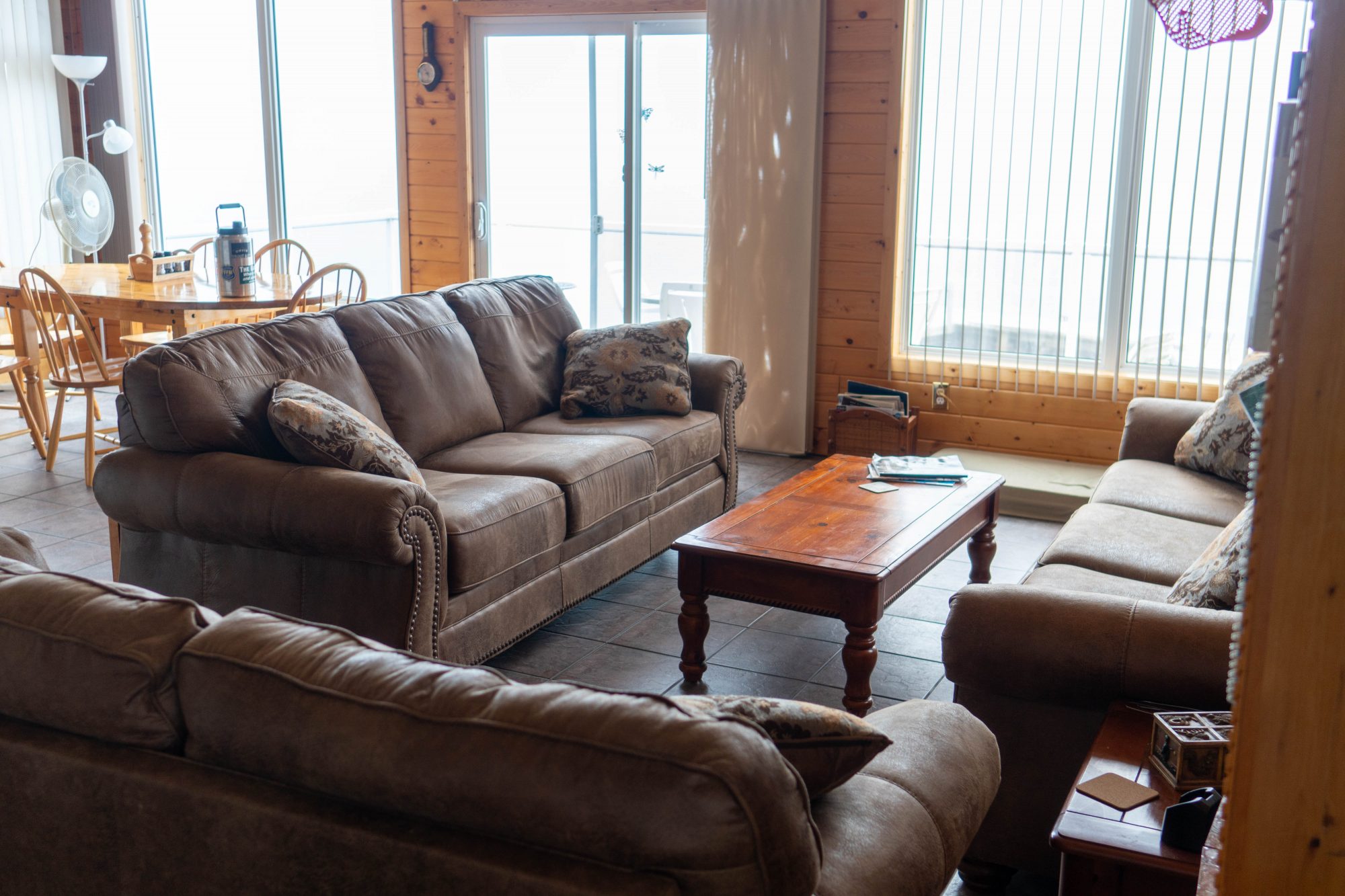 The fishing at Bowman Island Lodge is literally at your doorstep. This allows angling even if the weather turns for the worse. We were grateful for this on day two as the fog had rolled in once again. Normally, you wouldn’t be able to head out fishing in these conditions, however, we were able to fish the circumference of Bowman Island safely and found great success catching and releasing coaster brook trout. 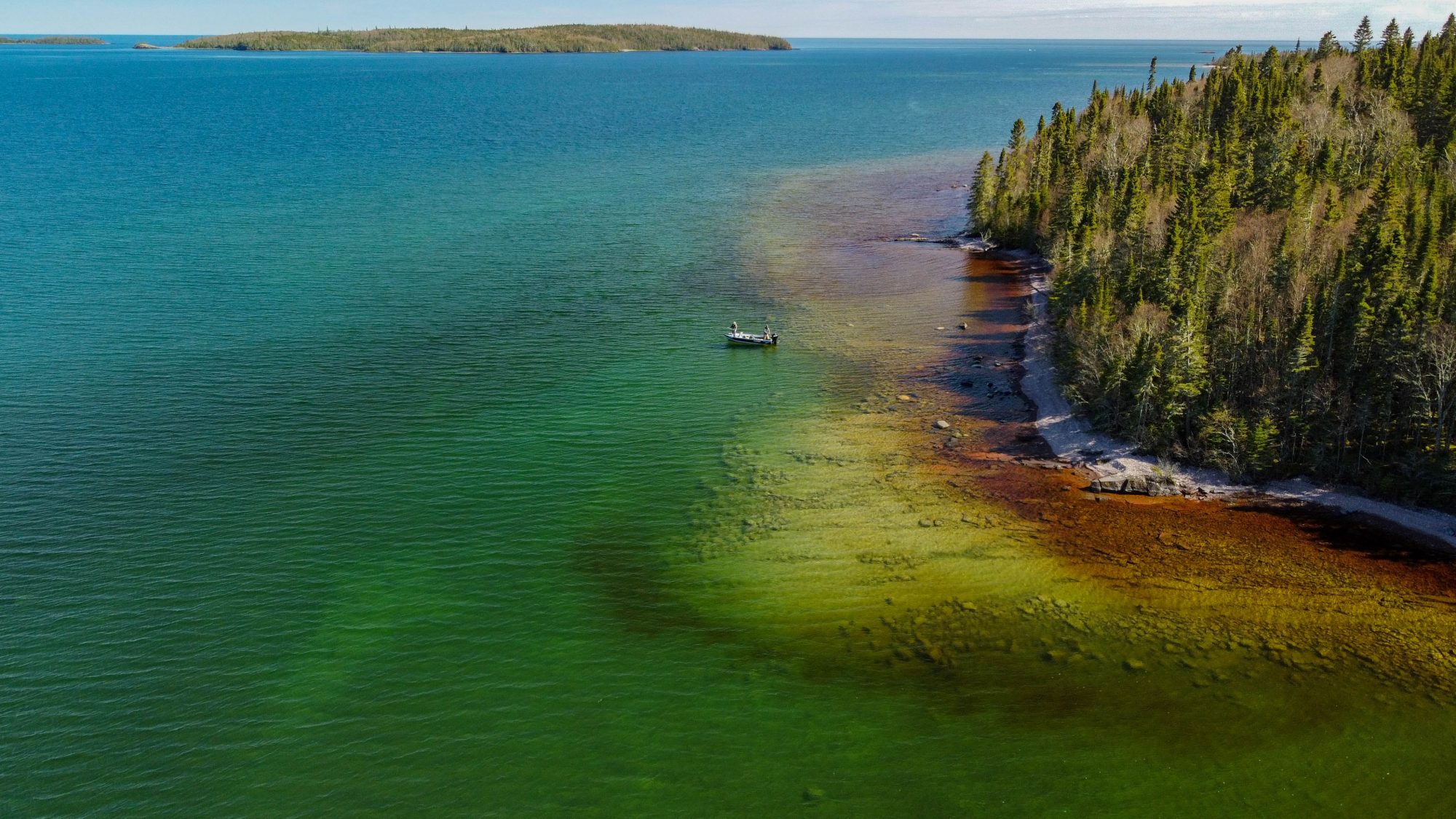 In the afternoon, after lunch, the fog lifted and we went on an adventure heading out into the open Lake Superior, outside of the barrier islands to coastal Superior. Gary told us of a creek tributary in the area.  Casting streamers right into the rapids and quickly retrieving on a tight line saw Jack catch and release numerous Brook trout, and even a rainbow!  We then decided to switch gears for another unique springtime experience out of Bowman Island… Lake trout on fly. 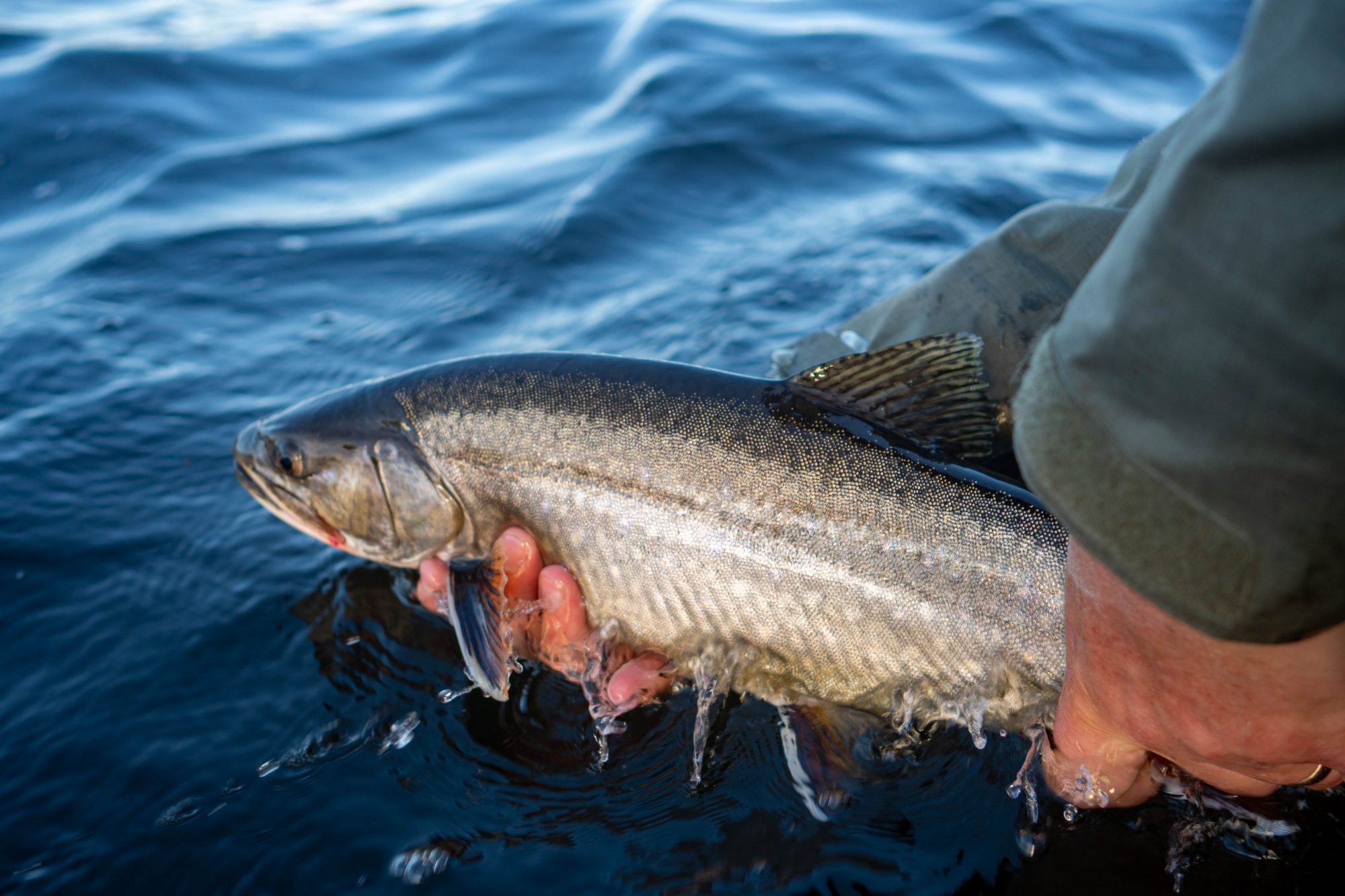 During the time when the brook trout are in feeding on baitfish shallow and close to shore, you too can find lake trout behaving the same way.  They aren’t relating to shoreline structure however, they are relating to topographical changes in the bottom of the lake – look shallow! Target humps rising to 10 feet or so and cast to the drops. The trout will be circumnavigating the structure hunting for food.  Make your cast, count your fly down to the appropriate depth and start your retrieve. Erratic of course.  It wasn’t long before we were dancing with shallow water lakers on fly. Flies used were Clouser minnows, 3-5 inches long blue over white. 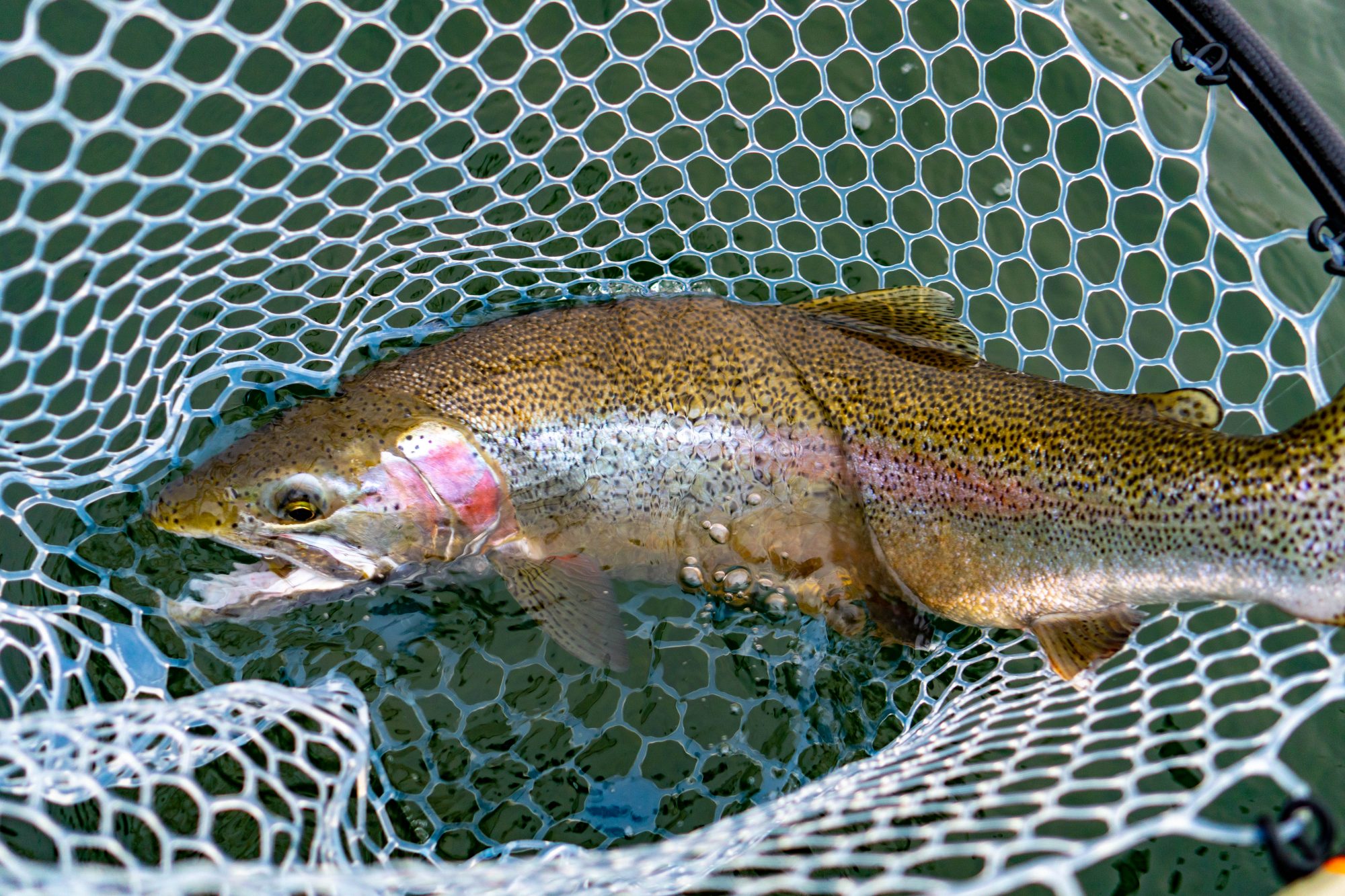 We were fortunate enough to be entertained by Gary and his fish for another couple of days. You know the drill,  fish… eat… sleep… repeat. We hit the window perfectly for this year and had a blast poking around the barrier islands of Bowman Island Lodge. Gary’s boats were comfortable, perfectly equipped for fly anglers (all anglers) and stable in the bigger water. Food was tremendous and the fishing was, in a word… Epic. I am reluctant to release this article for fear the secret will get out. But when push comes to shove, this shouldn’t be a secret at all! Go experience it for yourself, and hopefully, I’ll see you there. 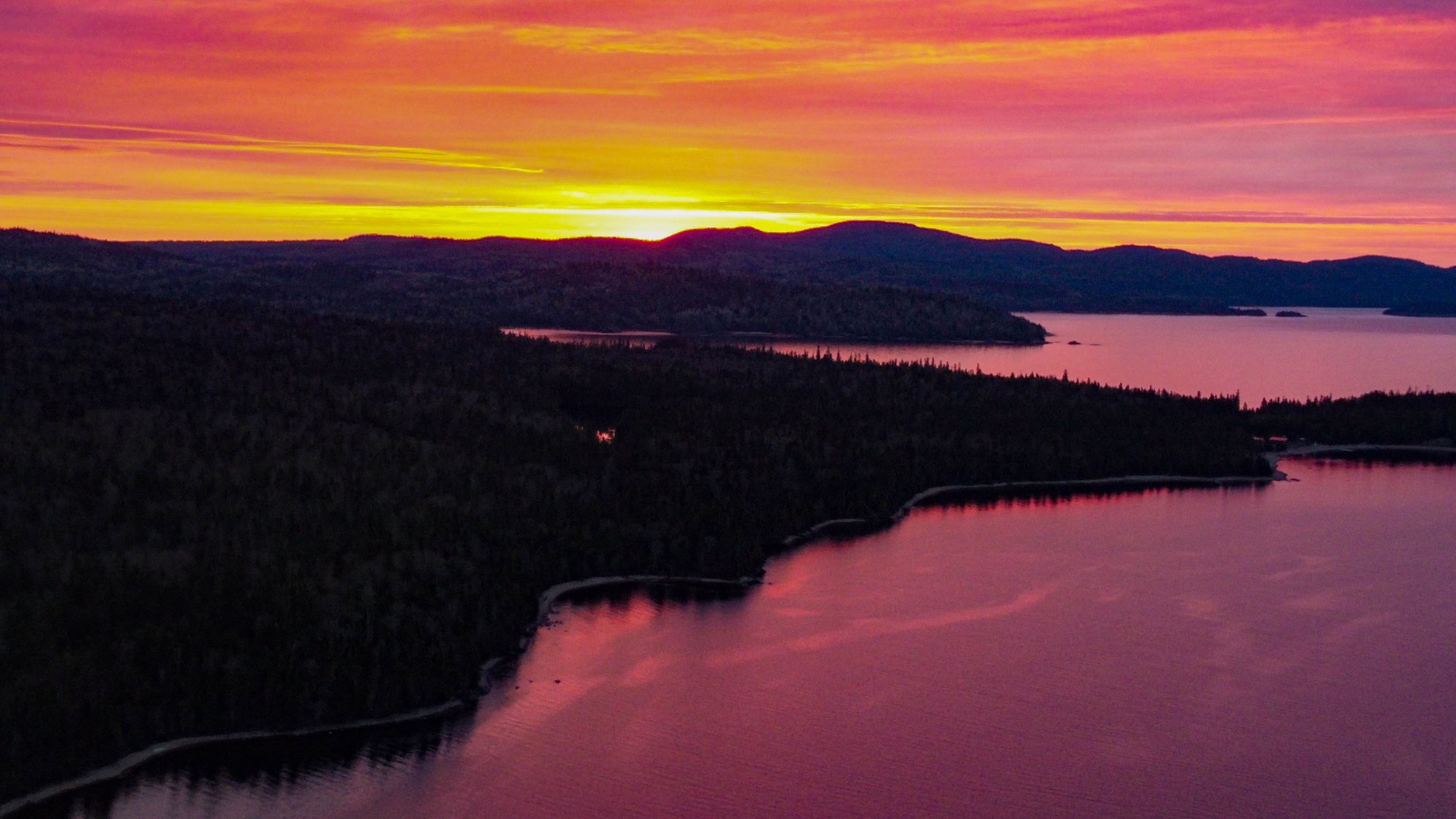 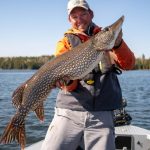 Mark Melnyk is a host/producer/partner at The New Fly Fisher Television Show now entering its 21st year of broadcast. With a palpable love for fly fishing and adventure, you’ll often …