I knew that everyone from the Anishinaabe on down had stories to tell about the Great Lake they call Gichigami. So, it was no surprise that after six days kayaking amidst Lake Superior’s Slate Islands near Terrace Bay, I’d have stories too. I worried they would be about cold, wind and waves. I imagined regaling readers about how I almost added another vessel to the estimated 550/350, mostly undiscovered shipwrecks that litter the depths of the notoriously frigid, largest fresh-water lake in the world.

What hadn’t occurred to me was that my tales would be of crystal-clear water, dead-calm days, wildflowers and swimming – yes swimming – in sun-warmed bays protected from Lake Superior’s unfathomable depths of up to 405 metres where the average water temperature is a kayaker-numbing 2°C. 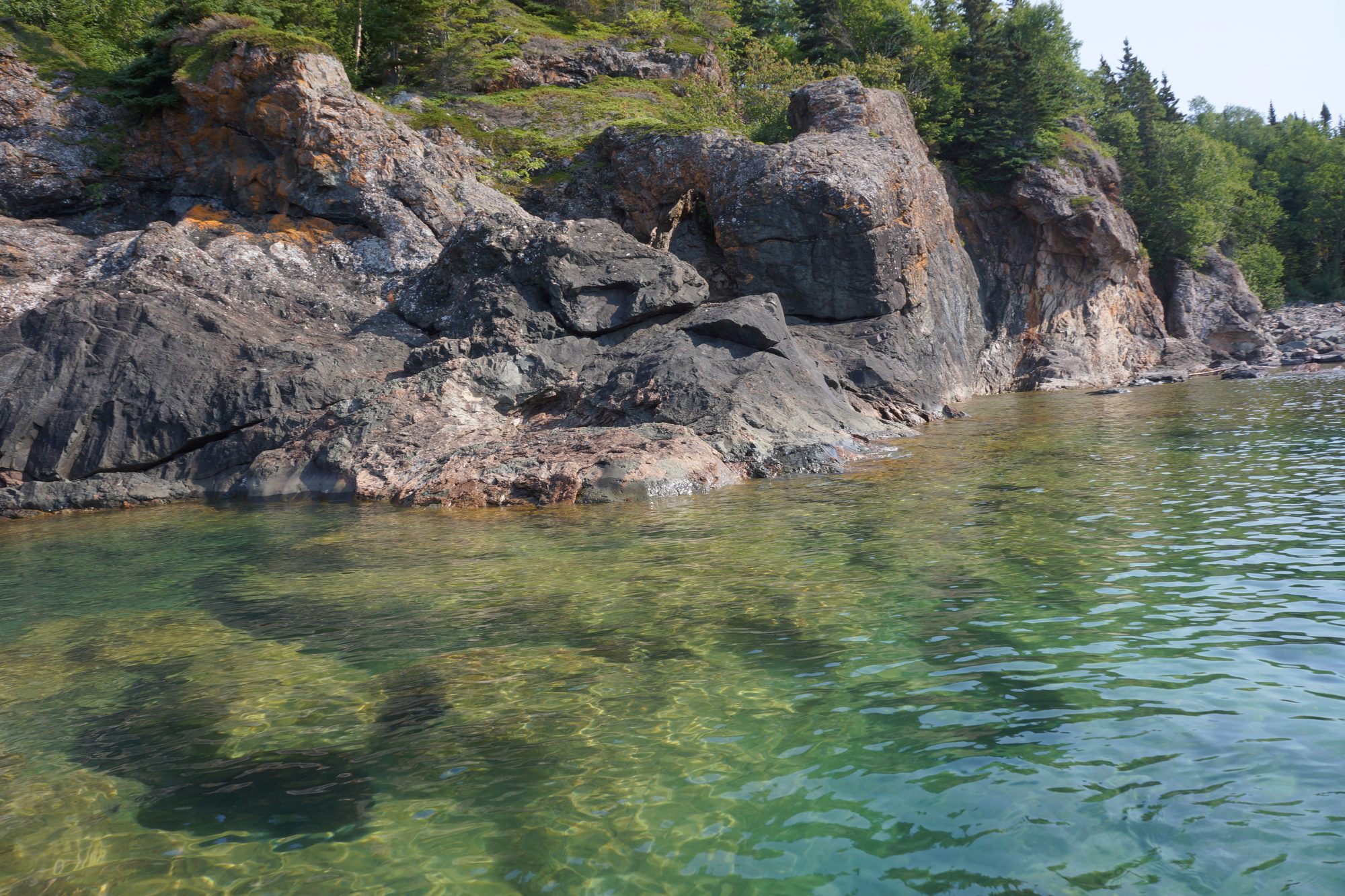 Our trip began with a drive along Highway 17, following a route known to me as “North of Superior.” I recalled the stomach-churning, 1971 IMAX film of the same name showcasing the dramatic landscape that now stretched out before me. Although I’d driven North of Superior before, I’d been too young to appreciate the rolling forested hills, tidy farms, cascading rivers, lakes, waterfalls and curving shorelines along what is surely Canada’s most under-rated scenic drive. As we made our way northwest, I imagined I was in a vintage convertible, a chiffon scarf blowing in the breeze with James Bond behind the wheel expertly negotiating the sinuous road.

Once in Terrace Bay, it didn’t take James – I mean my partner Alex – and I long to find the Slate Island Brewing Company. We ordered one of their unique brews recommended by friendly locals keen to share their stories about Lake Superior. Soon, Kendall, our server, entered into the conversation. She stoked my worst fears about the Lake Superior of my imagination: huge angry waves, gale-force winds, the Edmund Fitzgerald… Kendall recounted how, as a young child, she’d been stranded on the Slate Islands for three days along with her father and two siblings. “A storm came up out of nowhere,” she recalled. “We stayed in the Come and Rest (one of a number of cabins built on Lake Superior’s islands just for this purpose). My dad was really worried,” she said. I shook my head in disbelief when this Northern Ontario native divulged that rather than being afraid, she recalled three fun-filled days.

Our kayak trip, organized by the Wawa-based outfitter Naturally Superior, began the next day with a boat shuttle. About 30 minutes and 13 kilometres of inky-smooth, open water later we entered Slate Islands Provincial Park. This archipelago of eight islands is best known for its herd of woodland caribou, the world’s tallest shatter cone (more about that later), enormous lake trout, its protected waters and Lake Superior’s highest lighthouse. The Slate Islands are a kayaker’s dream. They are readily accessible from the mainland by shuttle or, for the brave, in a day-long paddle, and while we never spied an elusive caribou, we saw lots of fresh evidence.

The Slate Islands are a kayaker’s delight

We also came across an abundance of wildflowers, most of which were new to me. Some of them, including alpine bistort (Bistorta vivpara) and Northern anemone (Anemone parviflora), are “Arctic disjuncts” since these plants are normally found in sub-Arctic, alpine areas. There were plentiful picturesque camp sites, numerous protected bays where we swam, magnificent sandy beaches, loads of Group of Seven white pines slung haphazardly with sweeping old man’s beard (Usnea spp.), and a unique species of mountain ash (Sorbus decora) referred to as Lake Superior coastline mountain ash. 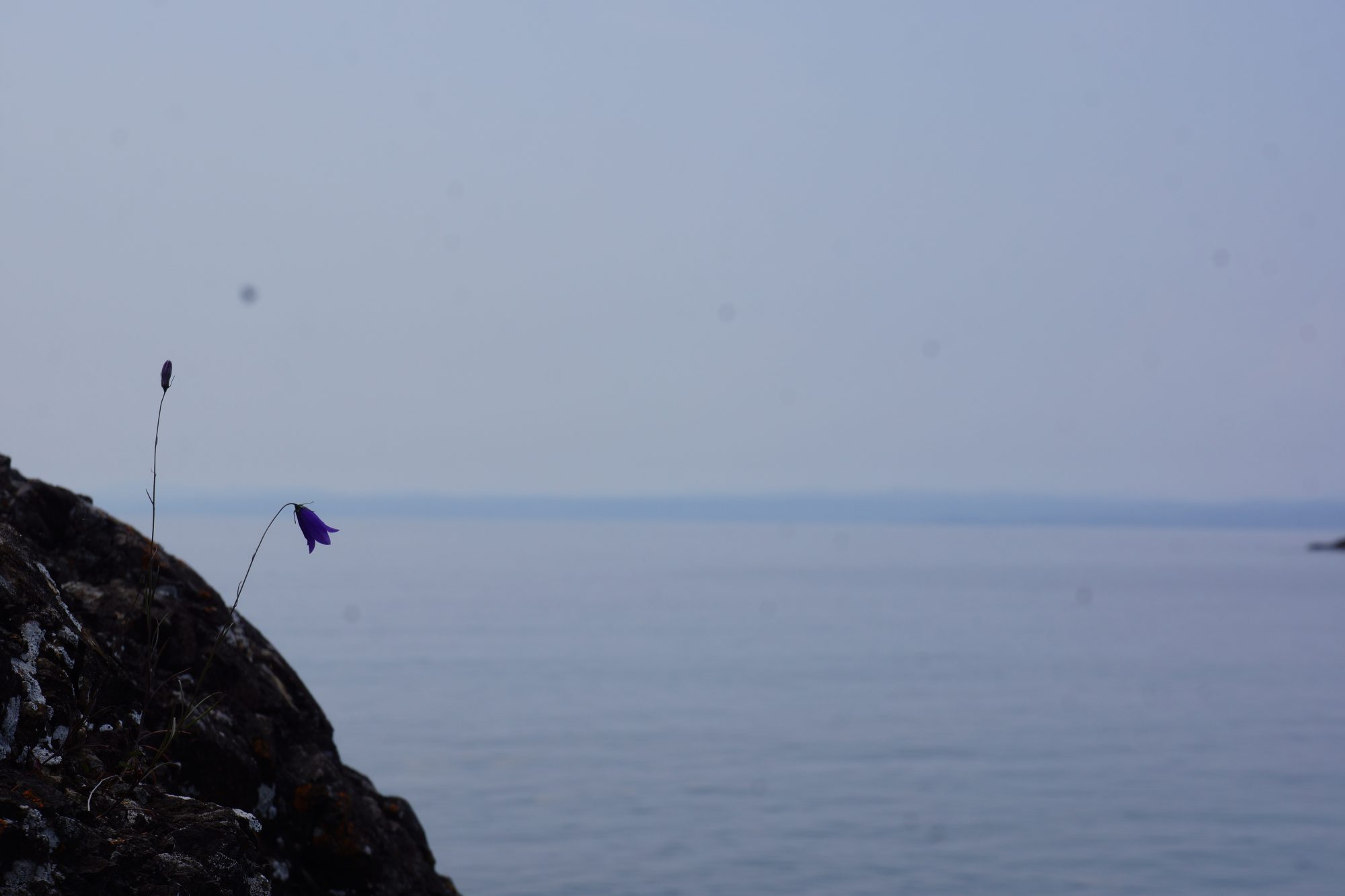 Many of the plentiful wildflowers were new to me.

The Slate Islands comprise Mortimer and Patterson islands, as well as numerous islets. Over five days, we circumnavigated both large islands as well as the nearby Leadman Islands. We hiked up to the lighthouse where we had an open vista of the clearest and cleanest water of any of the Great Lakes. Facing southwest, we learned the next stop was Duluth, Minnesota, some 500 kilometres away. 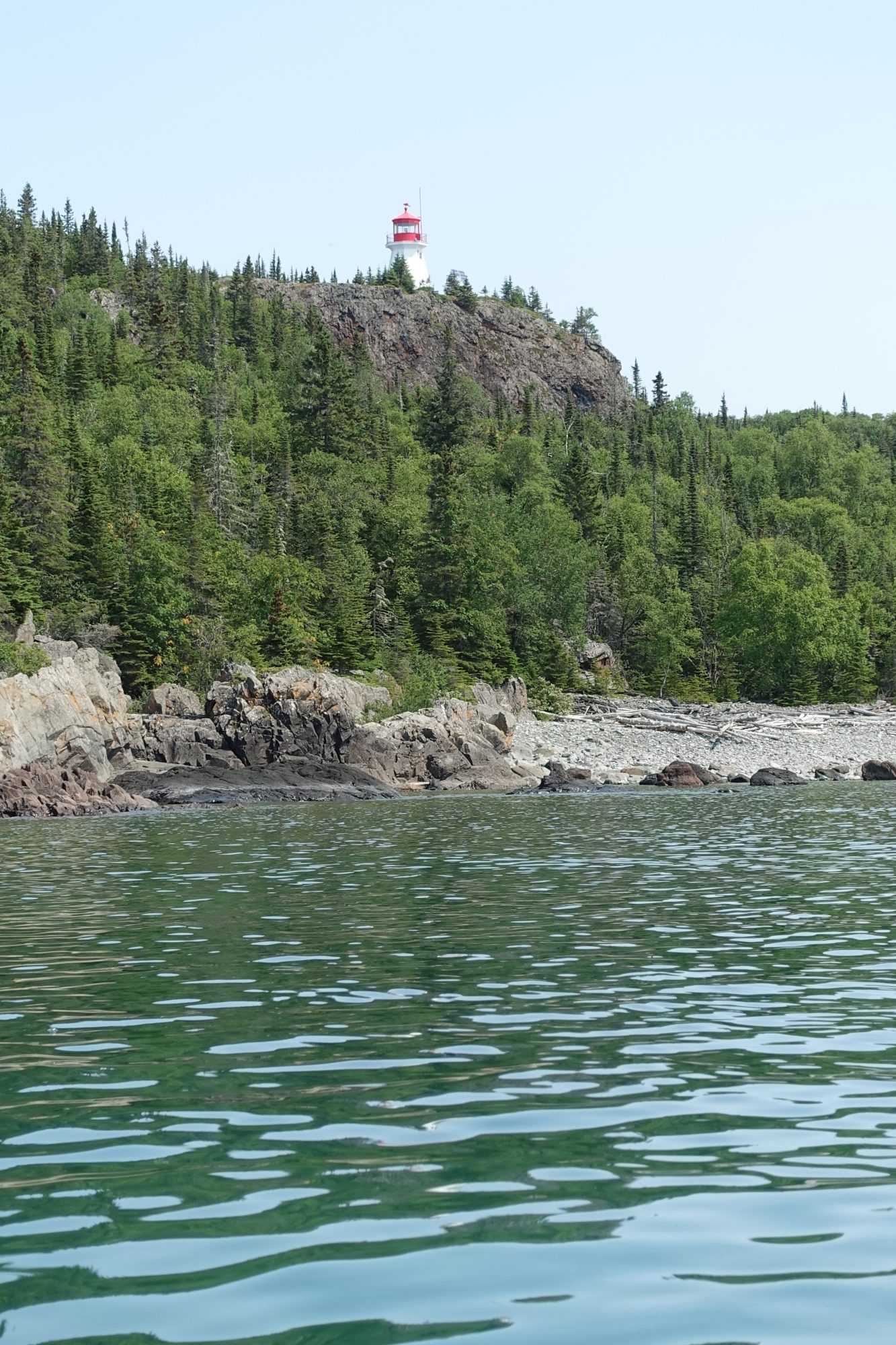 As happens on these trips, our group of five guests and two guides quickly bonded into a small troop. Our tents went up and came down quickly. Our meals, prepared by and cleaned up by (what a treat) our two excellent guides, were fresh, tasty and plentiful. We were guided to sites we would have never found on our own. We explored the depths of an old copper mine, dropped in at a shipwreck and learned that the Slate islands’ unpretentious, 10-metre tall shatter cone suggests a meteorite that crashed to the ground millions of years ago formed the 32-kilometre-wide crater now home to the Slate Islands. 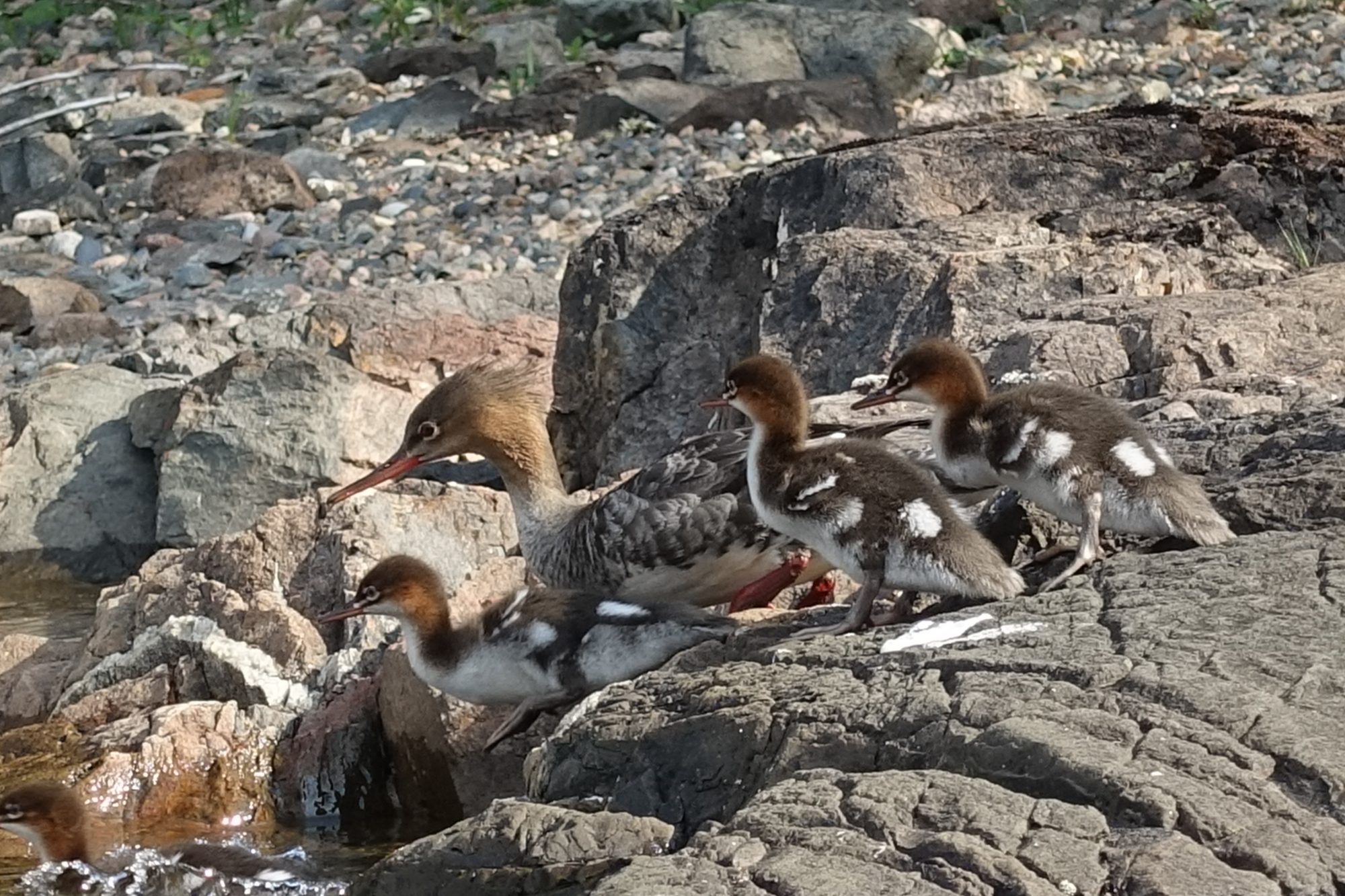 A fine family of mergansers.

While we mostly enjoyed smooth water, Lake Superior had to put on a bit of a show for our group of “southerners” (all seven of us grew up or lived in Southern Ontario). One day, we battled twisting bronco-like waves in near 15-knot winds – a breeze by Lake Superior standards, but a challenge in a small kayak. I think I enjoyed this day the most as it tested my paddling prowess while I was secure in knowing our guides were fully aware of the capability of both our kayaks and our small group of paddlers. It was an invigorating learning experience. 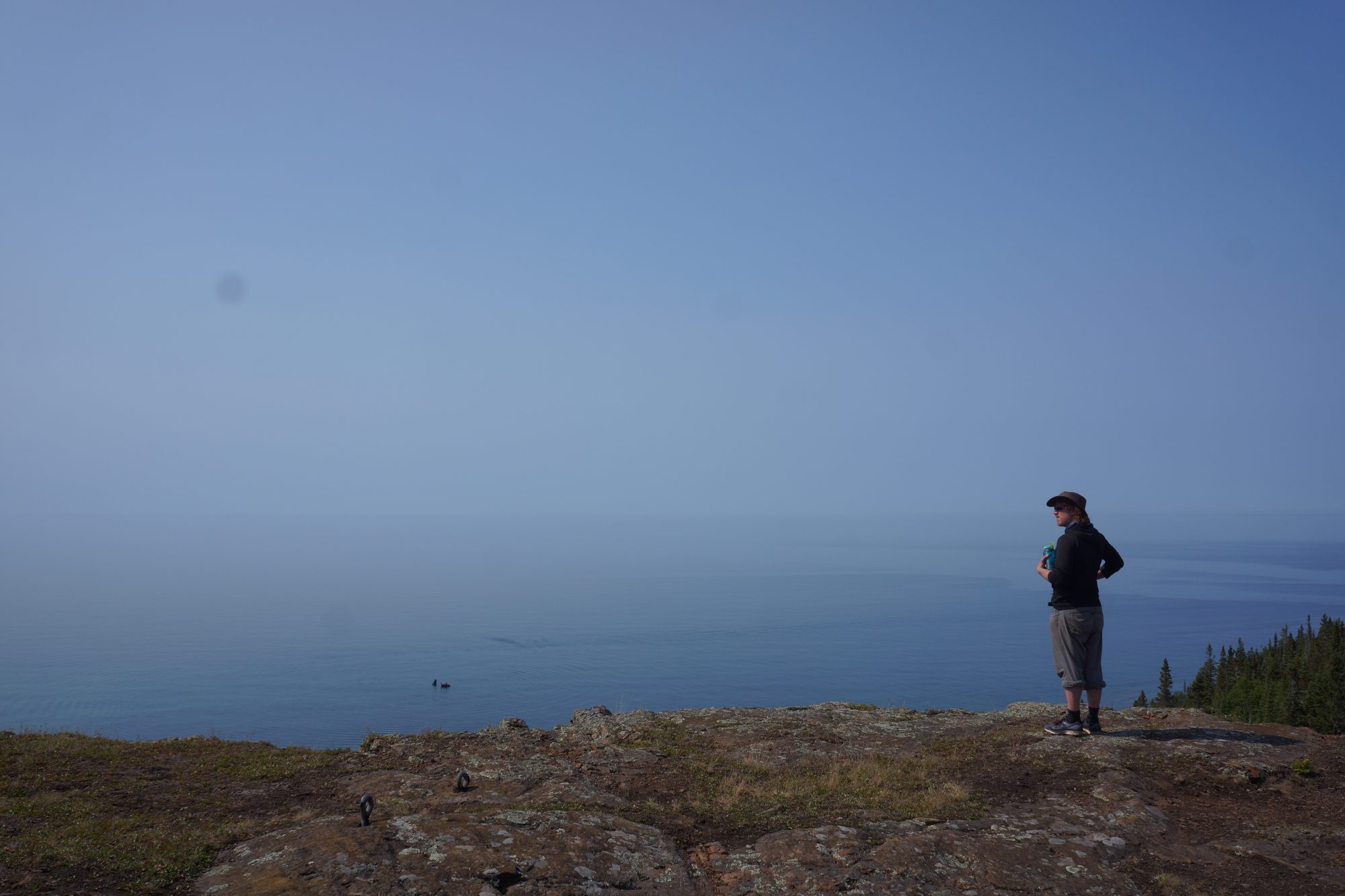 When it came time to load our kayaks back onto our shuttle, I wasn’t ready to leave the peace, quiet and other worldliness of what our outfitter Naturally Superior accurately billed as a world-class destination. Fortunately, another tasty brew from the Slate Island Brewing Co., more of Kendall’s stories of drama on Lake Superior and dreams of Mr. Bond at the wheel of a sports car cruising along one of Canada’s most picturesque drives eased my return to civilization. 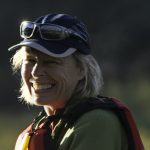 The winner of numerous writing honours including a National Magazine Award, Nicola is the author of 10 books, including the popular Loops & Lattes Hiking Guides (Caledon Hikes; Halton Hikes; …