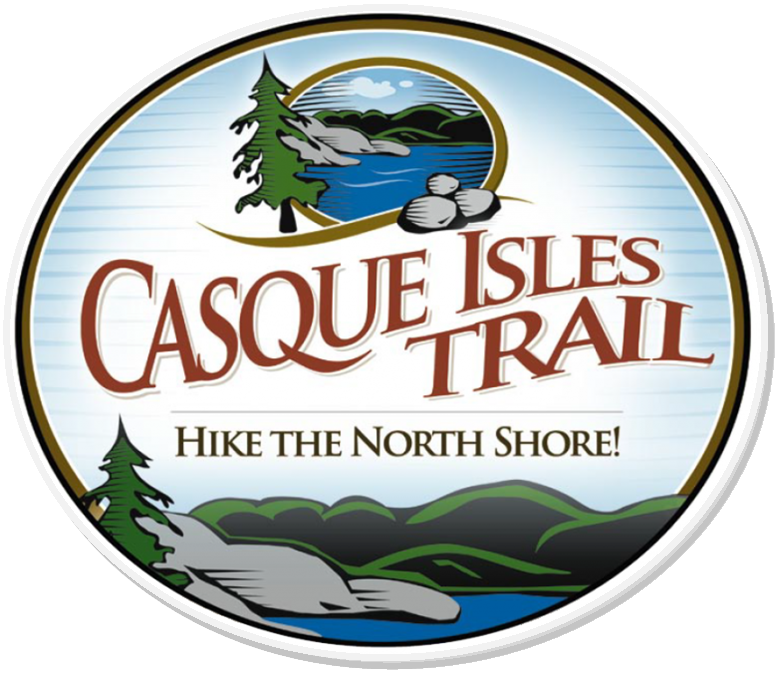 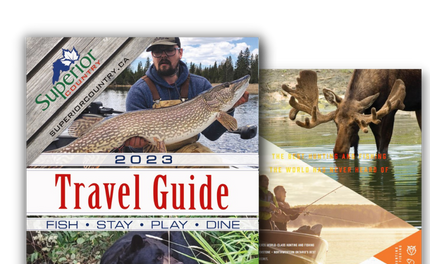 The Casque Isles Trail is the foremost example of Top of Superior hiking outside of provincial or national parks. At 53 kms (33 miles) in length, this wilderness recreational trail is divided into 5 Segments and boasts 11 different Access points. From the shores of Lake Superior to incredible vistas from the Lookouts and the forests in between, the Trail provides a true North of Superior experience as it travels along the Lake Superior National Marine Conservation Area. While some seek the challenge of hiking the entire trail, day hikers can easily plan excursions from 6 to 13 kms (4 to 8 miles) or less if desired. It your traveling along the Top of Lake Superior the Casque Isles Trail is a must see!

The Trail has been hand built and maintained by passionate volunteers since 1976. Blue markers mark the main trail and white markers mark side trails or Access trails. The Trail is classified as difficult, but there are sections that provide for an easy walk. There are some steep grades and the creeks may have to be waded seasonally. The trail is suitable for hikers who have some experience and are prepared with proper equipment, food and water.

Highlights on this Segment are ancient raised sand and boulder beaches from the post glacial period. There are several stunning lookouts along this Segment, each with a different view of the Rossport Islands Archipelago. The trail also follows Rainbow Falls as it tumbles from chutes to pools that are easily accessible by a walkway and stairs within Rainbow Falls Provincial Park, Whitesand Campground.

A1 at Rossport, directly across the Highway at the east entrance to Km 4 and south on A2 to Highway 17. This can be done from either direction.

A4 at Rainbow Falls Provincial Park Whitesand Campground to Rainbow Falls Lookout. A day pass is required at the Provincial Park, follow the road in the Park to the Falls Trail. Enjoy the many viewing areas along the wooden walkway, cross the bridge at the bottom and follow the Nature Trail past the picnic table to the Lookout and return. 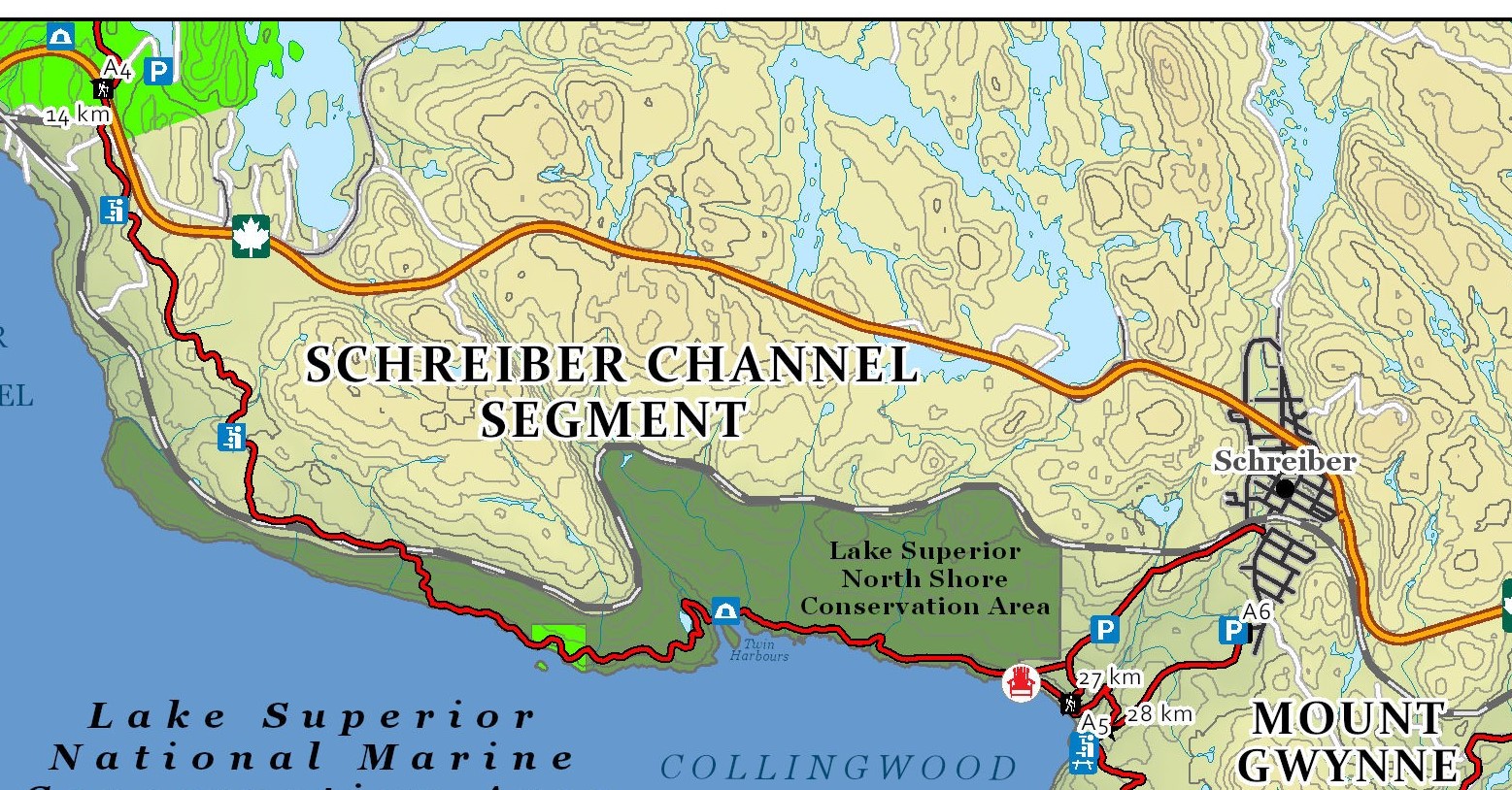 Hikers on this Segment can pause at the Selim Lookout for a view of Rossport down the coast, or stop at the Winston Point Lookout and see the resting place of the luxury steam yacht the Gunilda which sank in 1911 near the west end of Copper Island on Lake Superior. Experience the magnificent rock shoreline near Schreiber Channel Provincial Park as you traverse the trail towards Flint Island, treading on some of the oldest fossils and rocks on the planet. Follow the old tote road into Twin Harbours and think back to when the harbours were used to supply the materials needed to construct the Railway on the bluffs above. Stop for a while near the pretty Blind Creek Falls and cool off in the mist. Make sure to stop at Parks Canada’s Red Chairs just west of Schreiber Beach to experience the solitude and tranquility of Schreiber Channel.

A4 at Rainbow Falls Provincial Park, directly across the Highway at the entrance, 2 kms to the Selim Lookout and 3 kms to the Winston Point Lookout and return.

A5 at Schreiber Beach to Parks Canada’s Red Chairs. The Trail crosses Schreiber Beach, follow the Trail from the west (right) side of the Beach for 10 minutes to a side trail marked in white markers. Remember to share your experience on social media! 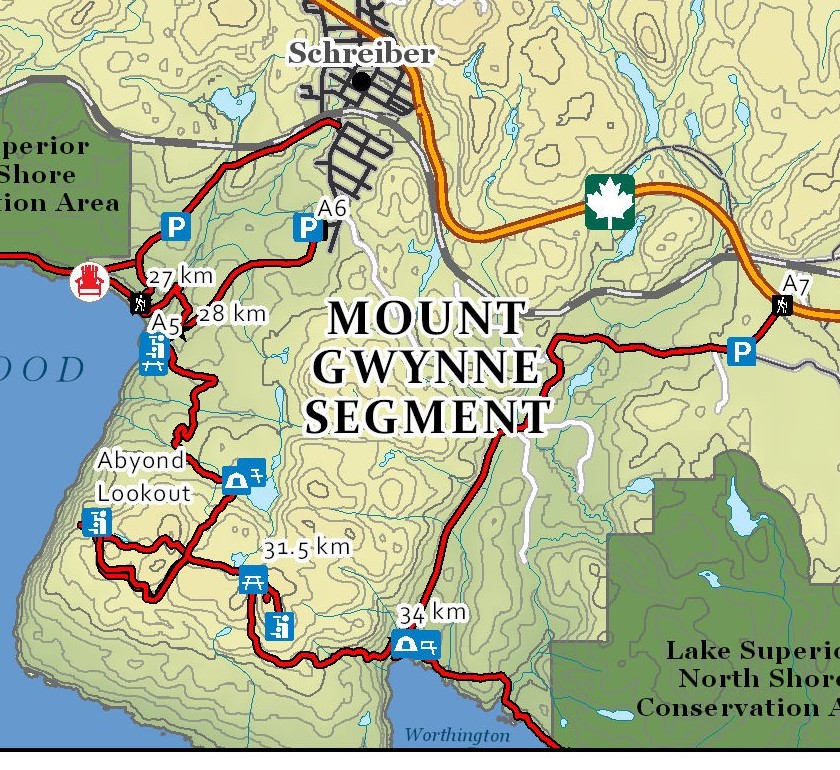 Hikers on this Segment will experience the peaceful and picturesque stroll along the Creek at the east end of Schreiber Beach as they head inland to climb 220 m (720 feet) over Schreiber Point to Worthington Bay. Proper equipment and planning is definitely needed to cross this Segment! Steep climbs and creek crossings will challenge even the most experienced hikers, but not without rewards. There are plenty of stops along the way, including the Picnic Table Lookout and Fourth Lake. Follow the side trail to the Abyond Lookout if you have the time, and make sure to make the climb to the summit of Mount Gwynne. On a clear day the view from Mount Gwynne is jaw dropping, with 360 degrees of sights out to 80 kms away! The Casque Isles Trail connects the three communities of Rossport, Schreiber and Terrace Bay. This is the only spot along the Trail where you can view all three.

A5 at Schreiber Beach to the Creek Walk. Follow the Trail on the east (left) side of the beach for a picturesque 15 minute walk along the Creek. The Creek Walk trail ends at the Thomas McGrath Memorial Bridge.

A5 at Schreiber Beach to the Picnic Table Lookout. Follow the Trail along the creek and across the Bridge for a 45 minute hike to a spectacular vista at the iconic Lookout. Proper footwear is recommended for this hike, the Trail past the Bridge climbs a steep hill and care must be taken coming back down.

A6 at the far south end of Winnipeg St. in Schreiber to the Picnic Table Lookout. Taking this Access Trail means that you won’t have to climb the hill off of Schreiber Beach. Follow the white markers to the main trail and turn to the left for a 45 minute excursion to the Lookout. Trail conditions on the A6 Access can be wet seasonally or after rain events.

A7 on Worthington Bay Road to the Mount Gwynne Lookout. Technically, this may not be a short hike. Worthington Bay Road is not maintained and will require a 4 km walk to the beach from the parking area. From there turn west, right, for a 220 m climb to the Lookout. Take a break at the Picnic Table, making sure to sign in, and follow the white markers on the side trail for the final push to the summit. 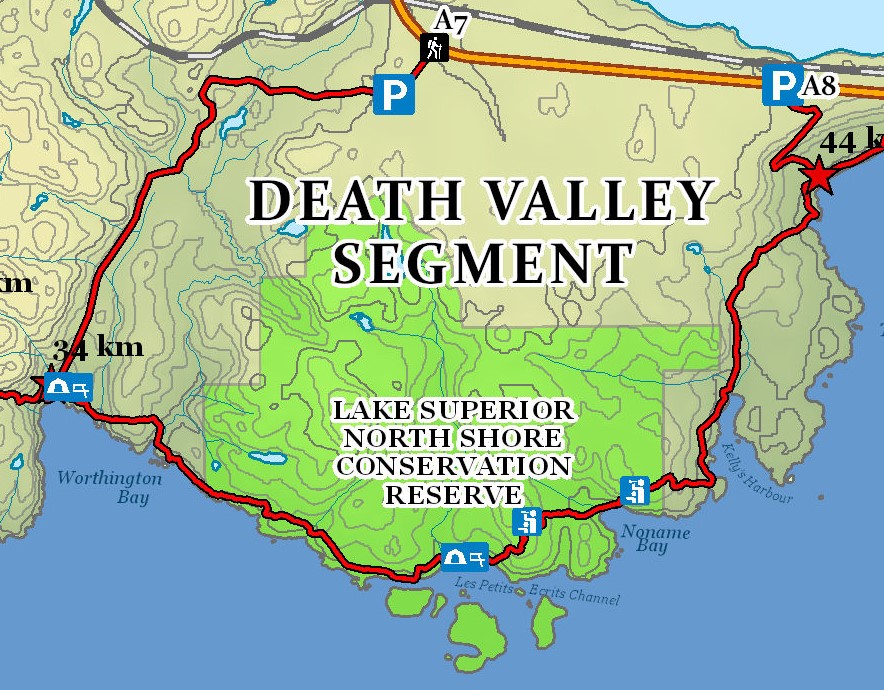 The name refers to the ease with which Ojibway perched on the rim of surrounding hills to shoot moose and caribou below. Hikers on this Segment will experience the awesome beauty and natural splendor of Lake Superior to its fullest! Worthington Beach is one of the best kept secrets on the North Shore. Sit for a while and think back 1000 years when the Ojibway plied this area in birch bark canoes. Then get hydrated to begin the assault on Death Valley, the most difficult and technically challenging Segment of the Casque Isles Trail system. As you scramble over and around the gigantic wind swept shoreline you will be astounded by the beauty of it all. Take your time and soak it all in. Climbing the hills along the Segment will test your legs, see if you can figure out which one we refer to as Three Pause Hill. Take a lunch break at Les Petits Ecrits, but not for too long as you are only half way across! Another bay, another climb, until the descent into pretty Kelly’s Harbour and then Hydro Bay. 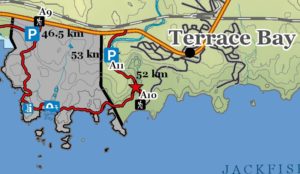 This is the Segment that is recommended for anyone who wants to have the full wilderness adventure that the Casque Isles Trail offers. The trail crosses the Terrace Bay Nature Reserve, owned by the Thunder Bay Field Naturalists. The rocky wave-swept shoreline fronts onto Lake Superior and features many Arctic Alpine disjunct plants. Here the Casque Isles Trail asks that hikers stay on the marked trail and leave all plants as they are found to protect them for others to enjoy in the future. The boulder beaches that are crossed higher up off the shoreline are remnants of the last ice age. Make sure to take some photos at the iconic Lyda Bay Lookout to share your experience later. Lyda Bay and Danny’s Cove are shallow and warmer bays that are perfect for wading and a cool swim. A can’t miss on this Segment is the Aguasabon Falls that is at the eastern end of our Trail. The Falls are a spectacular sight to see from the viewing pods and walkway. Taking the last Access Trail to Terrace Bay Beach across the bridge provides a great view of the Lower Aguasabon Falls and leads to one of the most northern beaches on Lake Superior. 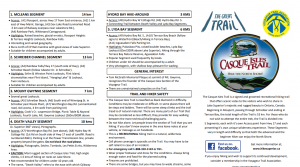